Liverpool’s Walker Art Gallery was opened in 1877 and was donated to the town by brewer Andrew Barclay Walker, who lived in Gateacre.

Walker was born in Ayrshire in 1824, the second son of Peter Walker of the Fort Brewery. He was initially educated at the Ayr Academy but when his father moved to Liverpool in the 1830s. Walker followed and attended the Liverpool Institute.

On completing his schooling Walker joined his father in the brewing business and they expanded into Warrington  They acquired Pemberton Brewery and initially re-named it Peter Walker & Son, with it eventually becoming Walkers of Warrington. 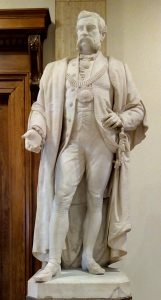 Walker developed a remarkable sense of anticipation. One of his best ventures in his early career came when he bought and stored as much brandy as possible, having correctly predicted that it would be in short supply due to the failure of crops. During the 1850s and 1860s he developed a number of new processes for brewing ale and porters, as well as distilling and malting.

Walker first became a town councillor in 1867. In 1873 he was elected Mayor and to celebrate his term offered to donate an art gallery to the town, gifting £20,000 of his own money. Walker himself was not an art collector but his public houses were built to high architectural standards. On 28th September the following year Prince Alfred laid the foundation stone and the council set aside £1,200 for the purchase of paintings and other works of art. It was opened by the Earl of Derby on 6th September 1877 and over 300,000 visited before Christmas. That same year he was knighted.

In 1886 Walker was appointed High Sheriff of Lancashire but he had no ambitions to become a Member of Parliament. Although he certainly had the credentials, he always said he wanted instead to remain in Liverpool to serve his fellow citizens.

Walker continued to donate to public projects in the 1880s and 1890s. He gave £17,000 towards the foundation of the University of Liverpool’s engineering laboratories and along with Colonel Bousfield he set up the 1st Liverpool Rifle Volunteers.

In the late 1860s Walker moved from Huyton Park and settled in Gateacre, building a huge house called The Grange on Rose Brow. Built in an Elizabethan style and using local sandstone, it had 21 bedrooms, drawing room, library, music room, billiard room and smoking room. 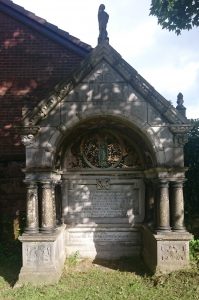 Walker’s biggest legacy in the city is the art gallery, which now houses one of the largest art collections in the country. However he also gifted local to his home, celebrating Queen Victoria’s Golden Jubilee in 1887 by donating a bust of her for the village green.

Walker was married twice. His first wife Eliza gave him two daughters and six sons, two of whom became successful horse breeders rearing winners of the Grand National and Ascot Gold Cup winner. Eliza was just 49 years old when she died in 1882 and five years later he married Maud Okeover, daughter of Charles Okeover of Staffordshire.

Andrew Barclay Walker died in 27th February 1893 at The Grange after a long illness. He was buried in the graveyard of All Saints Church in Childwall alongside his first wife. Walker’s old house in Gateacre is still there and is now private apartments, known as Seafarers Drive. This is after its most recent use as a home for retired seamen, run by the Apostleship of the Sea between 1970 and the late 1990s. 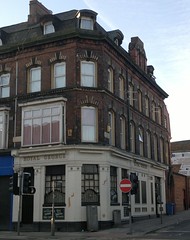