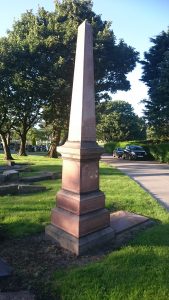 morial seen on the left when entering Anfield cemetery from Priory Road is that of a boy who drowned in the River Ribble in 1892.

Edward John Jones was a sixteen year old scholar at St Johns College in Grimsargh near Preston. He was the son of an architect and the family home was at 81 Edge Lane.

On 31st October 1892 Edward and a number of other boys had a game of paper chase, or ‘hare and hounds’. He and a boy called Frederick Flood were the two hares and were chased by a pack of forty. The idea of the game was that they had a head start and left bits of paper as a way of keeping the hounds on the scent. These could then blow 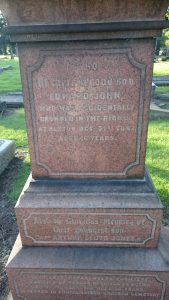 On reaching the River Ribble the hounds were closing in. Hot from the chase, the two boys, who were strong swimmers, jumped in to the cold water followed by a master. However he swam back to shore on seeing the pair had turned and were heading back themselves.

The boys were in deep water but didn’t look in difficulty, then they suddenly disappeared below the water. When another pupil jumped in he was quickly pulled back by the master to prevent further tragedy. It was believed a strong current or whirlpool had sucked them under.

Attempts to recover the bodies were hindered by heavy rains. It was not until 29th November that Edward’s badly decomposed body was recovered after being spotted five miles away. A police officer at Walton le Dale police station saw it and ran two hundred yards before jumping in to bring it ashore. Finally, Edward’s grief stricken parents could lay their son to rest in Anfield Cemetery.

More tales from Victorian Preston are in this book