With the World Cup about to start in Brazil, that country’s influence in Liverpool is more prevalent than ever before. There are two Brazilian players at Liverpool FC, restaurants such as Fazienda Rodizio, Bem Brasil and Viva Brasil in the city centre, while the annual Brazilica festival is the UK’s biggest Samba carnival. It is not just the 21st Century that the Brazilians have been coming however, as in the 19th Century the city was twice visited by the country’s Emperor.

The Empire of Brazil was in existence between 1822, when it successfully fought Portugal for independence, to 1889 when there was a military coup that saw the formation of a republic. Territorially, it broadly comprised the areas that are modern day Brazil and Uruguay. The first Emperor was Pedro I, son of the King of Portugal whom he had waged war against. When he abdicated suddenly in 1831 to return to Europe, his son Pedro was just five years old and left under the stewardship of guardians who prepared him for his eventual coronation at the age of 14.

Under Pedro II’s rule steps were made to abolish slavery, the country was much more politically stable than its Hispanic neighbours and had a growing economy due to educational and infrastructure improvements. In 1865 the Liverpool, Brazil & River Plate Pacific Steam Navigation Company was set up as a subsidiary of Lamport & Holt to take mail and cargo to South America, with coffee being a major source of trade.

In May 1871 Pedro II and his wife set off on a 10 month tour of North Africa and Europe. This was the first time he had left his Empire and was triggered by the death of his 23 year old daughter Lepoldina, who was struck down with typhoid fever in Vienna earlier that year. Travelling under the assumed name of Dom Pedro de Alcântara he insisted on staying in hotels and turned down pomp and ceremony, preferring to instead mix with scientists and other intellectuals with whom he shared interests.

The Emperor visited Liverpool on 26th July, having spent the previous night at the Queens Hotel in Chester. He took an early train to Birkenhead, where he was shown around Birkenhead Ironworks, later to become Cammel Laird. After a tour of the docks he took the regular passenger ferry from Woodside, declining an offer from the Mersey Docks & Harbour Company of having exclusive use of a private steamer.

On arrival at the George’s Landing Stage, a curious crowd began to form given there were three carriages waiting to greet the entourage, which had been sent by the Adelphi Hotel. However his insistence on no ceremonial welcome meant there were few police present and a beggar was able to get right up to the Empress and hold his cap in front of her, but he still wasn’t given any small change. 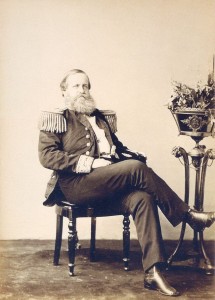 The first place to be visited was the Custom House, where Pedro II was keenly interested in the chemical laboratory where the strength of wines and spirits was tested. He was then taken to the Town Hall to meet the Mayor, but there were no formalities save for the Brazilian flag being hoisted and he was just given a quick tour of the building. Then it was on to Exchange Flags and St George’s Hall, where he inspected the fire police and was given a demonstration of how the pumps work. He then took a river cruise to see the extent of the docks before returning to shore and the Adelphi, where he hosted a banquet for local merchants.

The following day the Emperor left Liverpool for Manchester, having left a very positive impression on all who met him. His determination to avoid incurring any expense to public bodies was applauded by the local media, with the Liverpool Mercury commenting that ‘his affability and the easy manner in which he spoke to persons of the ordinary ranks of life, without the rigidity of etiquette, gained very high opinions amongst those who were brought into acquaintance with the illustrious visitor.

Five years later Pedro II was in Liverpool again, as part of a 18 month tour that also took in parts of the United States, Middle East and Russia. Once again he travelled in low key fashion, happy to be free of the burdens that encountered him in Brazil. He arrived at 10am on 23rd July 1876 on board the Cunard steamer Russia, which had sailed to Liverpool from New York. The Town Hall did not send any carriages, knowing that they would be declined and he was met by Brazil’s Vice-Consul in Liverpool Jose Marques Braga, who lived at 28 Ullet Road. This time Pedro II had no intention of staying in the city and took carriages straight to Lime Street station, where he boarded a train to London.

The emperor arrived back in Brazil in September 1877 and remained in the country until he was overthrown in 1889, when he went into exile in France, where he died of pneumonia in 1891. He hadn’t forgotten Liverpool however, as in 1887 he had joined the Liverpool Astronomical Society, which had set up a branch in the Brazilian region of Recife the previous year.