The Cock & Bottle pub in Wavertree High Street has absorbed into it what was once the smallest house in England.

The pub’s address is 93 Wavertree High Street, with the house formerly being 95. The house was built in the middle of the 19th Century in what was a passageway.   At 6 feet wide and 14 feet long it was reputed to be the smallest in England, although the ‘Smallest House’ in Conwy, Wales claims the title for the United Kingdom, being the same width but just 10 feet in length.

It is reputed that in the late 19th Century as many as eight children lived in the house, with the father having to go up the stairs sideways due to his shape. The  last occupant moved out in 1925 and it was eventually absorbed into the pub in 1952. After years of campaigning, the frontage of the house was restored in the late 1990s with a fake window and door fitted.

Renovations in 2011 have led to the house being divided off again to provide a separate entrance to flats above. This has led to a real door being installed again, although it is to the right of where the original one was.

The Cock & Bottle hasn’t always been a pub, in the early 20th Century it was a temperance hotel. It is currently owned by T & J Thomas Estates of Wavertree Road and being next door to a betting shop is popular with sports fans. 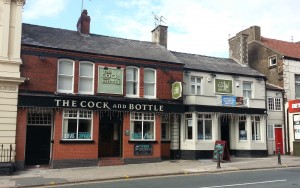 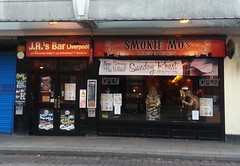