A busy station on the Merseyrail underground network was the scene of a tragedy near the end of the 19th century when a man was run over by a train and his body not discovered for several hours.

James Street opened in 1886, the terminus of the Liverpool to Birkenhead railway. Along with Hamilton Square at the other end, James Street (photo below by Hammersfan) was the first station in the world to be accessed via a hydraulic lift and in 1892 the line was extended to Central. 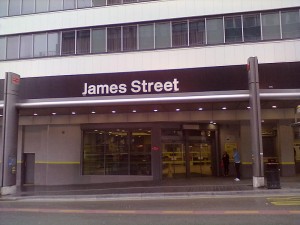 It was at the entrance to the new tunnel connecting the station with Central where a horrible discovery was made in 1899. In the early hours of 25th june that year a platelayer was doing his rounds there when he came across body parts. The Liverpool Mercury described the body as ‘frightfully lacerated’ with pieces of leg and a hand spread along the rails. The upper body and head remained intact and was dressed in clothing that indicated that the accident had happened as the man concerned was on his way home from work.

The remains were removed to the Princes Dock mortuary and later identified as those of 53 year old Frederick Marsden, who lived in Spencer Street in Everton and worked at Rugby’s wine merchants in Dale Street. The father of eight had been expected home as usual and it was a mystery why he had been at a station where trains are bound for the Wirral. It was known that for the past year he had suffered dizzy spells and paralysis on his left hand side, while he was also known to get worse for wear after drink which could have explained any fall.

When the inquest took place before the coroner Mr T E Sampson on 27th June the mystery of how he had come to be at James Street station was revealed. A man named William Evans, a colliery proprietor from Bromborough, had given Frederick some coppers for carrying some parcels to the train for him at 2pm on 24th june. Frederick, who was said to be under the influence of drink, had then been seen by a train fireman walking along the platform fifteen minutes later but nobody saw him after that. At 2.30pm a hat belonging to him was found on the platform by a boy and handed to the station inspector, yet it was ten hours before his body was found.

It appeared that he had been run over by several trains as he was believed to have been dead for several hours, but nobody had seen anything untoward at the tunnel entrance. With nobody having seen Frederick either fall or be pushed the jury returned an open verdict.