One of the buildings most desperately in need of renovation in Liverpool city centre is the old Futurist cinema in Lime Street, which has been derelict since the 1980s after being one of the top entertainment venues in town. 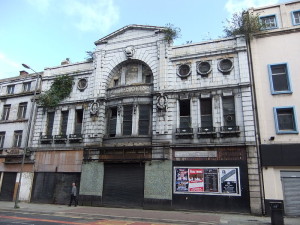 The cinema was the first in Liverpool city centre, opening its doors on 16th September 1912 as the Lime Street Picture House. Seating 1029 people, it had a Georgian front and French Renaissance interior. The floor was tiled and walls made from Sicilian marble. With films then being silent, an orchestra was present to play music to accompany them. During the week of 1914, the film Antony and Cleopatra, the Liverpool Echo reporting that it was claimed to be the ‘most beautiful ever produced’ was shown. The following month the main feature was The Golden Pathway, produced by Brooklyn company Vitagraph Players. It was directed by and starred Maurice Costello who was portrayed as the first matinee idol.

Despite many men being away fighting during World War 1, the cinema remained popular, perhaps because of the wartime theme on occasions. The Echo reported on 11th January: ‘Large audiences put in appearances from the opening right to the close at 10.30. The Ivory Snuff Box, an exclusive four act film, is an extremely thrilling detective drama. The theme is the outwitting of German plotters by American detectives in the employment of the French secret police.’ There were some comedies to lighten the mood – A Yellowstone Honeymoon and Father’s Helping Hand – while there were also updates of war action and current events to keep people up to date with what was going on at the Front.

The cinema became the City Picture House in 1916, the same year that it became the first in the country to have a lift, which the Echo commented on 1st December would make the elderly and wounded soldiers glad.That month a Charlie Chaplin film, The Fireman was shown, leading to predictions of a ‘bumping house’ as he was always a ‘roar maker.’

There was another name change in 1920, this time to the Futurist, with the cinema now being controlled by the same company as the Scala next door (now the X in the City nightspot). The 1930s saw the Futurist have to install new sound equipment after the era of silent films came to an end, and it also faced competition from newly opened cinemas – the Paramount in London Road and Forum in Lime Street itself, which later became the ABC.

At the outbreak of World War 2 the cinema, along with others up and down the country, closed due to concerns about having large numbers of people in the same place. However the ban was soon lifted as cinemas were a good way of keeping morale and also allowed people to keep up to date with the war news, televisions being in the rarity. On the night of 3rd/4th May 1941 the Futurist and Scala suffered bomb damage although the Futurist was operational again by the end of the following month. 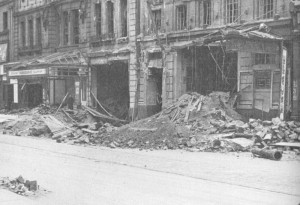 In 1954 cinema scope was installed after 20th Century Fox took over the running of the Futurist, allowing the showing of wide screen movies in Liverpool for the first time. ABC then took over in 1960 and they spent £50,000 upgrading it, which involved reducing the seating capacity to 870. They remained in control until 1982, when the Futurist and Scala were closed as the ABC consolidated its position by making their original building on the corner of Lime Street and Elliot Street a multi screen venue.

The Futurist has remained empty ever since and is now a sorry sight, with huge weeds growing out of the front. A short video taken in 2008 supporters shows the state of the interior of the building. However a campaign by supporters has led to positive talks with Liverpool city council so that the frontage can be cleaned up and hopefully illuminated by July 2014.