The Railway Hotel in Kirkby was the scene of a shocking theft in 1866 when a hearse driver returning from a funeral stopped off and helped himself to the landlord’s cigars whilst buying some ale.

Although Kirkby as a new town has only developed after the  2nd World War, there had been farms in the area for many centuries and when the Liverpool & Bolton railway was opened in 1848, a station was opened there. The Railway Hotel opened a few years afterwards and became a favourite stop for travellers using both trains and roads.

One such traveller was Samuel Smith in 1866, who was described in the Liverpool Mercury as a ‘mourning coach driver’ employed by Mr Brumby of Collingwood Street in Kirkdale. On 17th October that year he took a funeral party to Bickerstaffe and stopped at the Railway on the way back to Liverpool. Whilst they were having their refreshments the proprietor, 40 year old  Austin Peppin, noticed Smith admiring a cigar box that belonged to him.

After the party had left Peppin noticed that the cigar box was missing and headed straight to Kirkdale and the office of Mr Brumby. A search of the hearse which Smith had been driving recovered the box and he was arrested. The following day he appeared in court and admitted the theft, leading to magistrates Mr Moon and Mr Heald sentencing him to two months imprisonment.

This was not the first time Mr Brumby’s employees had caused him trouble that year. The previous month one of his drivers was overtaking another hearse in Kirkdale Road and mounted the kerb, running over and killing a twenty month old boy. In May an employee had stolen seven shillings from the office.

Austin Peppin, who had a wife and eight children, also enjoyed a distinguished career as a Conservative politician and Secretary of the Liverpool & district Farmers Association. He did run into some trouble in 1885 though when he lost his gold rimmed spectacles,leading to hm placing an advert in the Liverpool Mercury offering 10 shillings for their reward. 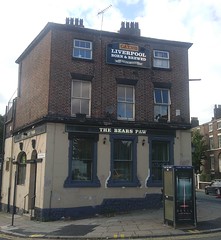 Our Lady of the Assumption Parish Club, Belle Vale, Liverpool
<img class='afg-img' alt='Church of Our Lady and St Nicholas, Liverpool • <a style="font-size:0.8em;" href="http://www.flickr.com/photos/9840291@