One of Liverpool’s most famous theatres is the Royal Court which was re-built in 1938 following a fire. It replaced an earlier venue that was first built as Cooke’s New Circus in 1826, which was one of England’s grandest provincial entertainment venues.

Work commenced on Cooke’s New Circus in November 1825. John Cooke was the previous proprietor of the Olympic Circus in Christian Street, where he put on many equestrian displays. This was forced to close in 1824 after flooding from a burst sewer, leading to him purchasing the land between Queen Square and Great Charlotte Street from Alderman Shaw. At first the new circus was only a temporary structure so it would be ready to house performances for the following year. Despite this, the Liverpool Mercury reported on 2nd December of that year that it would still be ‘commodious’ – roomy and comfortable, with extra embellishments added later.

It was hoped to begin performances in January but inclement weather delayed work and the opening was put back to 27th February. The architect was Samuel Rowlands,  who in the 1830s would design the Queen Insurance Buildings in Dale Street which are now being converted to a hotel. Three days before the opening the Liverpool Mercury said that the decorations of the audience part present a ‘splendour and magnificence never before witnessed in any provincial town in the United Kingdom. Some of the most prominent artists in the country were employed with gold ornaments also being modelled. 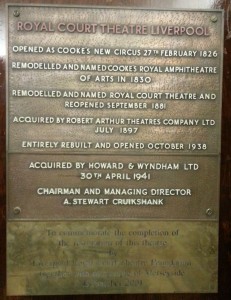 No expense was spared with the preparation of stages and scenery so that the performances were worthy of the surroundings, while Cooke was bringing with it his own stud of horses that were unequalled in docility, sagacity discipline and beauty. It was claimed that the orchestra was the largest and most talented Liverpool had ever seen, with the conductor Mr Parnell being on loan from the Theatre Royal in Covent Garden.

The opening night began with an address by stage manager Mr McGibbon, then the whole audience sang God Save the King. There was then a performance of the ballet La Fille Mal Gardee – The Wayward Daughter, followed by Mr Cooke himself mounting one of two Arabian Mares for a dancing horses display. He then took to another horse, Spotted Charger for a solo display on what was billed as the most sagacious horse in Europe. There were then demonstrations of tightrope walking, clown acts and the grand finale was another equestrian spectacle, Timour the Tartar, involving over thirty performers. The audience reaction was extremely favourable, with them rising to their feet and cheering on many occasions throughout the evening.

With regard to spectator comfort, the theatre was reported to be more spacious than the nearby Theatre Royal in Williamson Square. Even though it was only partially built the Mercury predicted it would become one of the most elegant theatres in the Kingdom. During his address Mr McGibbon read a report by three different surveyors confirming the building’s stability.

La Fille Mal Grande and Timour the Tartar continued for the rest of the week, with supporting acts including comic singers and Mr Cooke on Spotted Charger. The following week The Slave’s Revenge was performed with full Indian dress, with admission prices ranging from one shilling in the lower circle to three shillings and sixpence in the dress boxes. Doors opened at 6pm with performances starting precisely one hour later. Later in the year Richard Brinsley Peake’s The Fate of Frankenstein was performed. Mr Cooke showed his charitable side on one occasion in May, donating a whole nights takings for the assistance of out of work weavers. 19th June 1826 saw a benefit evening for Mr Goore the scenery painter. He took a share of the proceeds from short performances of The Monkey Metamorphosed and The Rajah’s Daughter, and was able to sell tickets from his hat manufacturing premises in Williamson Square.

The Rajah’s Daughter was a popular play and performed again in 1830, when there were six horses and a real waterfall as part of the act. At the end of that run which lasted a week, there was a one day break and the theatre was open again for the Elephant of Siam, with all the scenery having been repainted. By now the remodelling was complete and the venue was re-branded the Royal Amphitheatre. Charitable events continued though, with a performance of Luke the Labourer in June 1831 in aid of the homeless.

After fifty years as a venue that could show animals, the theatre was redesigned by Henry Sumner in 1881 and renamed the Royal Court. This building closed after a fire in 1933 and the current art deco structure was completed in 1938. In the 1980s it was used mainly for concerts but it is now firmly re-established as a theatre. Seating over 1100 people it has regularly hosted local favourites such as Brick up the Mersey Tunnels, Night Collar and Our Day Out.

Talk of the Town Bar, The Hague 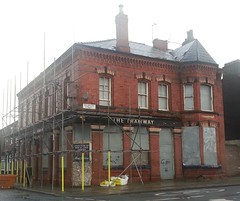