Every day thousands of cars travel down Edge Lane on their way in and out of Liverpool, the drivers and passengers no doubt unaware that one of the few remaining houses was the home of a woman whose death brought about a contested will and identity theft.

On 20th December 1863 a spinster Mary Billinge died at 4 Edge Lane, having had her age recorded as 112. Mary’s death notice in the Examiner recorded that she ‘had retained her faculties in a very remarkable degree till the last’ and that ‘she was never known to be confined to her bed for a single day until the week preceding her disease’

The Registrar was somewhat sceptical that somebody could have lived such a long life and made further enquiries before formally registering the death. This would not be easy as the registration of births was not c

ompulsory until 1837, but he did establish that as was claimed by the person recording the death Mary had indeed been born in Eccleston on 17th May 1751. She was the daughter of a farmer named William Billinge and had been christened at Prescot Parish Church on 5th June, leading to entries being made in the parish baptismal register. This led to an entry being recorded in the register of deaths that was forwarded to the medical officer which read ‘I am satisfied that the age of Mary Billinge of 4 Edge Lane is correct – viz 112 last birthday.’

Mary left a well furnished house and her solicitor Mr McClelland arranged an auction of her belongings on 12th January 1864. The Daily Post advertised that it would take place at ‘eleven o’clock precisely’ and that the effects were ‘substantial and well made.’ They included twelve mahogany chairs, an oak framed couch, a four poster bed, wardrobes, paintings, a gold watch, other jewellery and kitchen utensils. After the auction had taken place, an advert was placed in the Liverpool Mercury stating  that ‘If any cousins of the late Mary Billinge of 4 Edge Lane will call on Mr Llewellyn of 90 London Road they will learn of something to their advantage.’

Many people called Rose came forward stating that they were cousins, but  they were related to a Mar 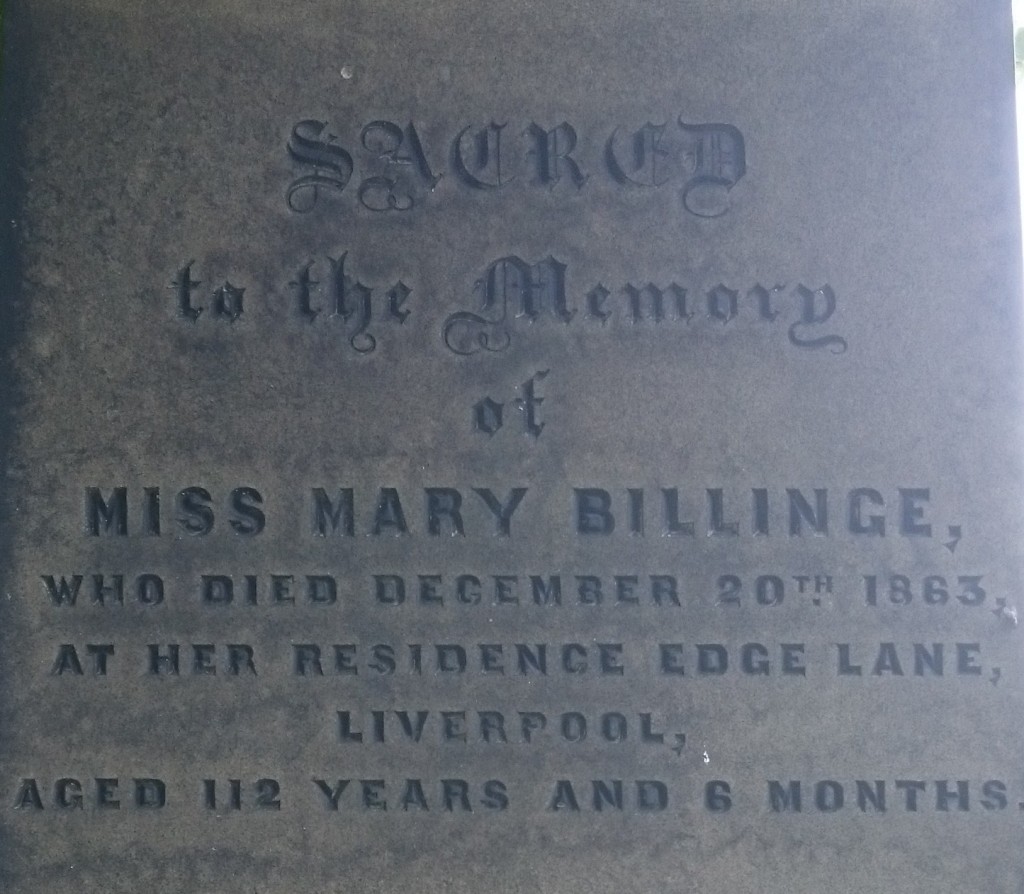 y Billinge who had been baptised in Prescot in 1782 and Mr Llewellyn rejected their claims. This led to a Chancery Court ruling that adverts must be placed for others claiming to be the relatives to come forward before any money could be paid to the Roses. Nobody did, and census records were then checked, establishing that the Mary Billinge who lived at 4 Edge Lane in 1851 gave her age as 70, giving clear credence to the Roses claims.

Mary’s well appointed memorial in Toxteth Park Cemetery in Smithdown Road gives her age as 112, but which Mary Billinge is buried there? The census returns would indicate that it is the one born in 1782, so in the time leading to her death was the person who died taken advantage of by a cruel identity theft opportunist?

DID SEAFOOD TRADER LIVE IN 3 CENTURIES?