A doctors surgery in Islington Square, on the corner of Islington and Shaw Street, was once a safe haven for children provided by a pioneering Liverpool charity. 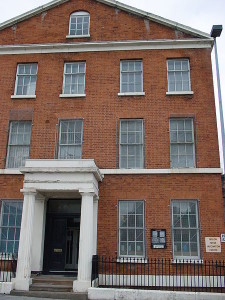 The formation of the society was unanimously approved by a meeting of philanthropic bankers, councillors, merchants, ministers at the Town Hall. The following day’s Liverpool Daily Courier reported that Agnew told those present: “Mendicants stopped at home and sent their children out into the streets in all weathers and at all times. Such parents ceased to look at their offspring as creatures entrusted to them by God and looked upon them simply as machines for bringing in a quantity of money. Such a society was bound to interfere and do something to protect these helpless little ones”.

There had been much debate about meddling in parent-child affairs, but the members felt the levels of cruelty were so great that they simply had to intervene. Through donations, the society employed inspectors to seek out the children who were most in need. They then asked for the help of police, magistrates and the school board to remove them from their situation.

Later that year a house in Nile Street (which was situated near the corner of Great George Street and Upper Parliament Street), was converted into a temporary shelter where the most vulnerable children could be housed. The house had a live in superintendent and matron, with many of those accommodated there having been found wandering the streets.

In its first year the LSPCC dealt with 378 cases, many of which resulted in prosecution of parents who had sent them out to beg. Adults who found children begging or selling goods on the street at night were encouraged to try and persuade them to go to the shelter where they would be given supper, a bath and a bed, whilst enquiries were made into their parents. One example was two sisters , aged 7 and 10, who lived in Henderson Street in Dingle. They were found begging at night, telling officers they were too scared to go home to their father until they had a shilling each. Places were found for them at the industrial school in Everton Terrace.

In July 1884 merchant William Cliff purchased the freehold of the house at 3 Islington Square and donated it to the society for use as a shelter. He dedicated it in the memory of his daughter Amy, who died in 1860 aged just ten. After nine months of refitting and furnishing, the shelter opened on 16th March 1885 with the opening speech being made by the Mayor, Alderman D Radliffe. He told those gathered that if such good work was done at the small shelter in Nile Street, then how great would the new building be in helping children escape neglect and danger.

One of the earliest cases to be treated there ended in tragedy due to the society not being able to intervene in time. Two year old Charlotte Graham was taken to the shelter on 24th April by an official after 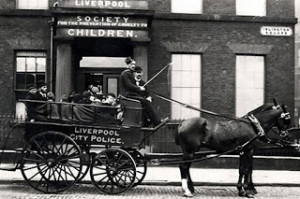 being alerted by police to a seriously undernourished child in Great Homer Street who was found home alone. Sadly Charlotte died the same night and her mother, who had been out drinking, was charged with manslaughter. Later that year though there was a far better outcome when a boy in Toxteth who kept in a sack in the attic was rescued and flourished at the home. His father was sentenced to four months hard labour for neglect.

In the same month as the house was purchased, a similar society was set up in London, with Mr Agnew being at its launch. Further societies were later set up in Edinburgh, Glasgow and Manchester. In 1889 they merged to form the National Society for the Prevention of Cruelty to Children but the Liverpool society remained a separate entity and it was agreed by both that they would not cross each others boundaries. A shocking case came to light in November the following year, when a child who was paralysed from the waist down and had the use of only one arm was left alone in a freezing house for three days  while his parents attended a wake. They were sentenced to three months imprisonment, while the 13 year old boy had to be removed from the shelter to the workhouse hospital due to him having nearly starved to death.

During the 1st World War the society stepped in to help many children who were neglected due to their fathers being away at the Front. In 1916 two mothers were jailed and their children sent to industrial schools due to them drinking heavily and causing neglect. According to media reports, the children were found to be ‘dirty and verminous’ but even then action was delayed initially due to the fathers being in the forces. 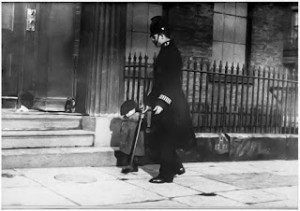 There were unfortunately some occasions when the good nature of the LSPCC was abused and it was used as a babysitting service. On 15th April 1938 a woman took a three year old girl to the shelter and asked if she could leave her there for a short while. When this request was refused she left, but a few hours later the same girl was found wandering alone in a busy shopping street. This time she was taken in by the shelter and an appeal put out for her parents to come forward. Two days later, a woman went there and claimed the girl, offering little explanation for losing her daughter and not reporting her missing.

In 1944 the shelter in Islington Square was deemed unsuitable for longer term stays and the society announced that it was looking for a different property. Four years later they moved into Linnet Lea in Linnet Lane, Aigburth and the Islington shelter closed. In 1953 the NSPCC announced that it wished to terminate its agreement with the LSPCC in terms of the areas in which they operated. To prevent any conflicts in the future, the LSPCC agreed to be absorbed into the NSPCC and this was completed by January 1954. With Linnet Lea not being required, it was disposed of and it later re-opened as Sydney House boys club, with Islington Square now being a doctors surgery.

The NSPCC has gone from strength to strength ever since and in 1989 was given statutory powers under the Children’s Act to apply for care and supervision orders, the only charity to have received this.