Nowadays it is Liverpool South Parkway station, a major bus and rail interchange for the south of the city and connection to the airport but up until 1990 the site was Holly Park, home of South Liverpool FC and venue for the first match to be played under floodlights in Liverpool, back in 1949. 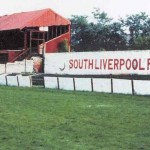 ocating to New Brighton and changing their name in 1921. A new incarnation was formed in 1935 and played at Holly Park, making an immediate impact by winning the Lancashire Combination three years running from 1937 to 1939. In the year they won the third title, they also won the Welsh Cup and Lancashire Trophy but failed to win election to the Football League, gaining just five votes.

After World War II South switched to the Cheshire County League but didnt have quite the same level of success. However they were still the first club in the Merseyside area to install floodlights, eight years  before Liverpool and Everton.

The floodlight switch on occurred on 28th September 1949, when a ground record crowd of 13,007 turned out to see South take on a touring Nigerian XI. The lights were turned on by the Lord Mayor of Liverpool, Alderman J. J. Cleary and the following day’s Daily Post described that ‘except for patches of darkness in the centre of the field the lighting proved a success.’

The Nigerian XI, who had beaten fellow Merseyside non league side Marine 5-2 at the start of their tour a month earlier, took the lead within 30 seconds and led 2-0 at half time. However South fought back after the break and two goals from Jesse McLarty earned them a 2-2 draw.

Another sell out crowd of 10,000 was at Holly Park in 1967 when a charity match saw a guest appearance by Hungarian legend Ferenc Puskas. The following year South were founded members of the Northern Premier League and in the 1970s future Liverpool FC stars Jimmy Case and John Aldridge began their careers with the club.

By the 1980s though South were struggling financially and although they won three trophies in 1983-84, including the Liverpool Senior Cup in which they beat Liverpool in the final, gates averaged only around 150. Their stand and clubhouse, 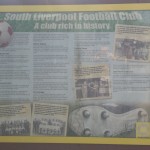 a  valuable source of revenue, was also repeatedly vandalised. In 1990 they left Holly Park and played at Bootle for one year, before folding in 1991.

Committee members were determined to keep the club name going and after a year   playing in a junior league merged with Cheshire Lines for 1992-93 to be able to play in the Liverpool County Combination. They now play in the West Cheshire League, their home games taking place at Jericho Lane in Otterspool.

The old Holly Park ground remained derelict for a number of years, before work began in 2004 to convert it to a major bus and rail interchange, merging the adjacent Allerton station with that of nearby Garston. All that remains of Holly Park is a small piece of the boundary wall, and there is a display about the history of the club.