One of the main thoroughfares of south Liverpool is Mather Avenue. It was named after Arthur Stanley Mather, a solicitor and alderman who lived in Woolton. 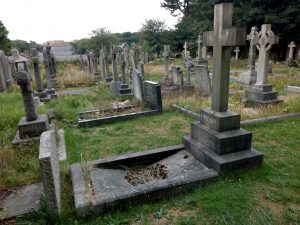 Mather was born in 1842, the son of J P Mather of Bootle Hall. He was educated at Rugby School and in 1865 was articled to Messrs Simpson, North & Co. After seven years there he set up his own legal firm in Harrington Street, which became biggest chancery practice in Liverpool, A.S. Mather & Son.

In 1900-01 he occupied the presidential chair of the Incorporated Law Society of Liverpool. In addition to his legal interests he had roles with a number of other organisations, including as Chairman of the Central Printing and Stationary Company, as well as the Liverpool board of the British Law Fire Insurance Company.

Showing a great interest in local politics, Mather was Chairman of the Much Woolton Urban District Council and oversaw its incorporation into the city of Liverpool in 1913. As part of the commemoration of this, he paid for the restoration of Woolton’s village cross. The following year he became a magistrate.

His charitable interests included the Liverpool Convalescent Institution and the Prescot Board of Guardians. He also had a keen interest in St Peter’s Church, which was just a stone throw from his home, Beechwood, on Church Road itself. Beechwood had been built in the 1830s by local quarry owner  James Rose, responsible for much of the growth of Woolton.

Mather had been a member of the council for just two years before he was unanimously elected as Lord Mayor for 1915-16 by Conservative Party members. He was never a great orator and is acceptance speech was simple, with him saying that although his head had been in chancery for fifty years his heart remained the same. During his year in office he raised a huge £86,000 for the Liverpool War Widows and Orphans Fund. Hi

s term of office would coincide with his and wife Frances’s golden wedding anniversary. This was celebrated at  Woolton Library, where he was presented with a golden village cross and golden chain purse.

In 1918 Mather was awarded the C.B.E for his fundraising efforts during the war. Locally, he was honoured with the naming of Mather Avenue, which was developed in the early 1920s by borough engineer John A Brodie. Developed as a route to Garston, it passed through open fields with trams running along the central reservation, but over time the whole road became built upon.

Frances Mather died in 1921. Arthur Stanley Mather lived another eight years, dying on 15th January 1929 at the age of 86. He was buried in the churchyard of St Peter’s alongside his wife and left an estate valued at £108,794, equivalent to £6.5 million today. One of his sons, Harold, followed him into chancery and became a leading Lancashire barrister while his grandson Donald became a theatre actor.