A plaque on platform one of Lime Street Station commemorates two railway workers fromthe Edge Hill depot who died following an accident, having first ensured the safety of all passengers.

On 20th May 1937  sixty year old Joseph Ball was driving the 1040 Euston to Liverpool express train, accompanied by fireman Cormack Higgins.  Just a few minutes into the journey, as the train was passing through the Primrose Hill tunnel, the smokebox deflector plate slipped causing a blowback which turned their cab into a furnace. The two men managed to bring the train to a stop three miles later at Willesden where they were taken to hospital with severe burns. The service itself actually continued the journey to Liverpool with a replacement engine and crew.

The men were described as comfortable by the hospital that evening, but their condition deteriorated and they both died the following week. The inquest into the deaths took place at Middlesex County Hospital on 31st May and heard how the deflector plate had not been properly fitted. The jury returned a verdict of accidental death, adding that the bravery of the men in bringing the train to a safe stop had avoided a serious accident. For doing this,  recommendation was made to the Carnegie Hero Fund Trust for gallantry so that financial assistance could be given to their dependants.

Both men lived near the depot, Ball in Northdale Road and Higgins in Longfellow Street. On 6th June a memorial service in remembrance was held at St Mary’s Church in Edge Hill, attended by 2,000 mourners, many of whom listened to the service being relayed on loudspeakers. 500 railway workers were present, being led to the church by their band. The vicar said in tribute ‘I feel the public realises all too little  what immense risks and sacrifices must be made day after day in order that the public services may be maintained.

The plaque that is now at Lime Street was at first placed in the lobby of the Edge Hill depot but when that closed in 1968 it was moved to Lime Street, where it can now be seen at the bottom end of platform one. 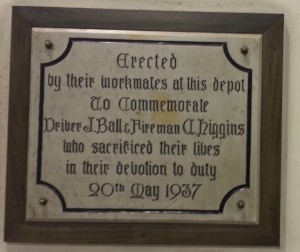