The Grand National Festival attracts lots of headlines some good and some bad. Consisting of favourites under-performing, drunk spectators, stylish ones staying in the top hotels, travel chaos and horse fatalities, the reports of the first race in 1839 could easily have been written today.

Races were run at Aintree between 1836 and 1838, but the 1839 race was the first to which invitations extended across the United Kingdom. It was billed locally as the ‘Great Liverpool Steeplechase’ although some publications further afar referred to it as ‘Grand’ rather than ‘Great.’

The opening of the railways meant that there was what the Liverpool Mercury described as an ‘unprecedented influx of strangers from Manchester, Bolton and other places in the manufacturing districts.’ There were also visitors to the town from all parts of England, Scotland, Wales, Ireland and even some from the Continent. It meant all hotels were full and private lodgings in great demand.

Betting at Mr Thomas’s Talbot Inn which was adjacent to the course the night before had Lord Macdonald’s The Nun as the 8/1 favourite with Mr Elmore’s Lottery at 9/1. Many of the horses and riders were accommodated there, with others staying with Mr Lucas in Great Charlottte Street.

The morning of Tuesday 26th February was dry and bright and by 9am the routes to Aintree were crowded with piemen, cigar sellers and gaming table keepers. The roads were then swarmed by pedestrians of all classes, while anything with wheels in the town had been procured to provide transport for those willing to pay. Seats on the omnibuses soon sold out at 2 shillings and sixpence each, with some of them being sold on by touts for four times as much. Those who were able to tolerate a bumpy ride were dragged along in sandcarts and for those who had not anticipated the difficulties in securing transport, they could at least console themselves with the unseasonably warm weather and anticipation of the race.

The crowd was estimated at forty to fifty thousand, half of which had squeezed into the Grandstand which was described as’crowded to suffocation.’ Refreshment facilities at the course were woefully inadequate and could not cope with the demand, with many heading to the Sefton Arms where gingerbread and oranges were on offer.

Amongst the many distinguished guests in the VIP areas were Lord Mostyn from Fflintshire and Thomas Trafford of Trafford Hall, in addition to a number of army majors. The most high profile were staying at the original Adelphi hotel, which stood on the site of the current one between 1826 and 1910. Guests from the Continent stayed at the Wellington and included the Princes Trautsmanndorf and Liechtenstein from the Austrian Empire. The Countess of Sefton the most dignified local guest.

Although the race was due to start at 1pm it was nearly two hours afterwards before the runners and riders began to assemble for the parade in front of the grandstand. It was noted that although the odds had narrowed to 6/1 The Nun looked a little too fat while Captain Becher’s Conrad, an outsider at 20/1, appeared in fine condition. There were eighteen horses in all with Lottery, owned by London horse dealer Mr Elmore, also looking in good shape. 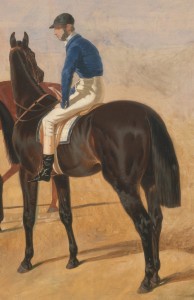 Shortly after 3pm the race began with Becher’s Conrad taking an early lead. The first few fences were light but there then came what was described as a ‘teaser, with a ditch about five feet wide.’ They all cleared it with Conrad still in the lead followed by Daxon, Lottery and True Blue.

There then followed a half mile flat run through a ploughed field at the end of which was a hedge with a brook at the other side. Conrad jumped first but rolled into it unseating its rider. After sheltering in the brook which was later named after him and feeling the wind of the heels of the other horses galloping over, Becher got back onto the horse and gave chase. Amazingly Becher was able catch up with the other riders and by the time the water jump came he was back in the lead, but Conrad was in no mood for any more exertions and jumped the rail but dropped into the water, throwing his rider off before floundering about and running off. Rust, ridden by Mr McDonagh also unseated his rider at this jump but he was able to get back on and resume the chase, which was now led by Daxon.

By the time the horses had cleared a number of easier fences and got to the grandstand Barkston was in the lead followed by Lottery and The Nun. By now there were fifteen of the eighteen starters still in the race  and they had run two miles. There was now a half mile flat stretch to the starting post for the second and final lap with the first fences being cleared more easily due to them having been broken up during the first time around. However there was tragedy at the water jump when 33/1 outsider Dictator, which was ten yards in the lead, fell headlong and although he got back up failed to clear the next fence and died instantly, his back broken. Such an event would make headlines today but was reported very matter-of-factly in the press, which also causally referred to ‘whip-and-spur’ work being required for the rest of the race.

Rust also pulled up at this stage and The Nun was struggling, which left Lottery, True Blue as the front three. Jem Mason’s Lottery remained in the lead and cleared the final fence first before easing away from the rest of the field to win by several lengths, followed by Seventy Four who just edged ahead of True Blue and Paulina. The course had been four and a half miles long and consisted of twenty jumps, the horses which finished all getting round in between twelve and thirteen minutes.

There was further tragedy in the next race at the same spot where Dictator had fell. This time a horse called Sweetheart fell and died instantly, the body being moved a few yards away and many ‘country people’ cutting lockets of the tail and mane off as souvenirs. On the Wednesday there was a second day of racing, with one of the sweepstake races involving Paulina who had finished fourth the previous day. Lottery had also been registered for this race but was withdrawn.  At the end of the day there was a fight between riders in the weighing room when a dispute arose over whether one of the starts had been fair.

The Liverpool Steeplechase made headlines in newspapers around the country, with the Coventry Herald predicting that  ‘it will long be an event in the annals of sporting’ and the Nottingham Review describing the course as ‘immense’. The Liverpool Mercury though was much more concerned with animal welfare and hoped it would not be repeated, writing in an editorial: ‘We have heard with alarm and regret that it is in contemplation to establish steeplechases annually or periodically in this neighbourhood. If any such design is seriously entertained, we trust that some means will be adopted to defeat it.’

The Grand National as it became known has roughly followed the same course ever since. There have been amendments to fences to minimise risk of harm to the horses although fatalities remain far higher than the steeplechasing average. Over 70,000 attend on the day and it now attracts worldwide attention, with style being of the essence for many spectators and lots of others paying more attention to betting form and beer. Throw in the difficulties getting a taxi or seat on the train and not much has changed since 1839.