A Liverpool bound ship sank off the coast of Cornwall in 1868, leading to the loss of nineteen lives including the captain and fifteen passengers.

On Thursday 21st May that year the 499 tonne steamer Garonne sailed from Bordeaux in France for Liverpool. The vessel belonged to Liverpool company James Moss & Co and was of modern design, being less than two years old and consisting of water tight compartments.

Commanded by forty five year old Captain Benjamin Drew, the ship was carrying a cargo of wine and brandy, as well as seventeen passengers who and twenty one other crew members. Amongst the passengers was Glaswegian gentleman James Muir, who was travelling with his wife, four young children and two nurses as he was in delicate health.

The Garonne was rounding the Cornish coast on the Friday night with the captain and lookouts anxiously trying to catch sight of Longships lighthouse, about a mile off Lands End. It was a breezy night and the ship ran aground on a reef, despite the best efforts of the engineer to turn and reverse when it was spotted. 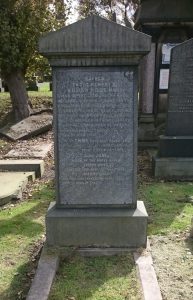 With the exception of Mr Turner who was bedbound with consumption, all passengers were quickly gathered on deck as fire took hold in the engine rooms. Distress flares were set off but although two nearby vessels responded, it was too dangerous to get close to the Garonne due to the rocks. Crew members desperately tried to float dingys but struggled as the first they came across contained a cargo of peas. As they were clearing these out, waves were overwhelming the vessel and many of the passengers were swept away. It was for this reason that only two of the passengers, Mr Muir and one of his sons, were saved.

Eighteen of the crew were able to escape in lifeboats but Captain Drew refused to join them and remained on the quarter-deck. He was washed away and his body was recovered the following morning. Three other crew members also drowned including chief steward John Niblock whose wife was due to give birth at any time. A fund was set up for the widow of John Niblock, administered by the incumbent of St Stephen’s church in Byrom Street.

On 18th June Mrs Niblock gave birth to a son, a week before the Board of Trade enquiry concluded that Captain Drew was to blame for the disaster. Their report stated that he had been sailing too fast during the dark and then failed to give proper orders when the vessel floundered. However it was stressed that they were at pains to come to this conclusion, as he had always been a competent captain and had sailed the return route on twenty seven previous occasions. Praise was given to the second mate for his role in trying to save passengers and the state of the dingy was criticised, along with the lack of oars and rudders. The committee recommended that cork jackets be kept on ships in future and determined that the captain and first mate could have chosen to get into boats to save themselves but didn’t do so.

Not all the bodies were recovered and that of another steward William Moss, was not interred in Anfield cemetery until 24th July. At the end of August an auction took place at Penzance of all cargo that was salvaged, including 182 hogsheads of wine. What remains of the Garonne now lie a few metres below the surface of the Outer Bucks, a popular diving location off Cornwall.

Read about more Cornish shipwrecks in this book available from Amazon