A parade on the River Mersey of two privateers one spring afternoon in March 1793 ended in tragedy when one of them sank, leading to the deaths of over one hundred people on board.

Europe had been slowly descending into chaos since the French Revolution of 1789 and in 1793 France declared war on Great Britain, having already been fighting against Austria, Spain and Portugal.

At that time privateering was common practice in wartime, with governments granting Letters of Marque to individuals allowing them to attack enemy vessels and plunder their cargo. One of those to take advantage was Nicholas Ashton of Woolton Hall, who owned the Dungeon Salt Works in Hale. He quickly purchased a brig called the Pelican and fitted it out for this purpose.

On the afternoon of Wednesday 20th March the Pelican was parading in the river alongside the Prince of Wales, which had been part of the First Fleet which took the first group of convicts to Australia in 1788. The two ships were displaying their eighteen guns which were ready for action. It was a pleasant day, but the wind began to get up and when the Pelican made a turn she keeled and the portholes filled with water, causing her to sink rapidly. On the shore, an excise officer named Mr Starkie launched boats to mount  a rescue but by the time they reached the vessel, most of those on board had drowned. The windy conditions had led to many going below deck, worsening their chances of escape.

The Chester Chronicle described the scene as ‘inconceivably shocking’ as the ‘heart rendering shriek of death pierced the air.’ In addition to ninety-four crew members, there were forty civilians on board, including some wives and children of the ninety four crew. In total only 32 were saved, most of them crew members who were the stronger swimmers.

Those who survived stated that the tragedy happened due to the guns being loose, causing them to roll and break the portholes which filled with water. It was later revealed that one of those who survived lost his mother, father, wife and two children who had all come on board to wish him a long and last farewell.

The disaster did not stop the Prince of Wales, which was owned by Clayton Tarleton, from sailing. On 7th April she captured a French vessel and returned to Hoylake a week later with a prize valued at up to £40,000 (£5.2 million today) Mr Starkie was presented with a medal by the Humane Society to recognise his efforts in saving many lives that may also have been lost. Nicholas Ashton returned to Liverpool to live in Clayton Square and died in 1833 at the age of 91. 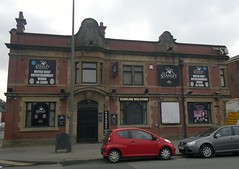