In recent years large warehouses have been cropping up all over the place allowing people to de-clutter by storing their excess belongings. It’s not such a recent phenomenon though, as in Park Road in Dingle there is a large warehouse which was built in the 19th Century for exactly the same purpose.

Coleman’s Depositories were established in 1875 to provide fireproof storage for furniture and also strongboxes for property deeds and jewellery. The building which still stands at the corner of Park Road and Northumberland Street was built on the site of the original one in 1900 and also house a piano repair business on the ground floor. The four storey building was built of red brick and cast iron, allowing for maximum storage space at minimum cost. There was also a cellar and lift. 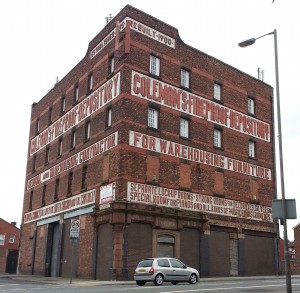 Workers at Coleman’s involved in the storage and removal of items needed to be strong, able to pack things quickly and also drive horses. The requirement for the office staff though was that they were smart and on 4th September 1899 the Liverpool Mercury carried an advert for a smart office boy aged about 14.

Apart from housing a number of mobile phone masts the building  has been out of use for several decades since it was ironically set on fire during the Toxteth Riots of 1981. Due to its size and lack of use, local parents would tell their children that it was where Santa Claus used to store the toys prior to Christmas. In December 2012 it was the centrepiece of a Christmas celebration which saw films of famous local sons such as Arthur Askey and Gerry Marsden, as well as modern day children singing carols, projected onto the walls.

The upper windows, which had been taken out leaving the top two floors exposed to the elements, have now been replaced and the building is currently up for sale, with offers of around half a million pounds being invited.

From Us To You Plaque, Mathew Street, Liverpool