Last weekend saw Newsham Park taken over by the Giants, but this isn’t the first time one of Liverpool’s parks has been the subject of a unique event. In 1929 Sefton Park hosted the Welsh Eisteddfod with a record crowd attending on the first day.

Previous Eisteddfod’s had been held in the city in 1884 and 1900, both taking place at North Haymarket off Great Homer Street. This huge building, normally used as a vegetable and hay market, could hold up to 10,000 in its auditorium and later become a munitions factory in the 1st World War. The festival continued to be held despite the hostilities and took place in Birkenhead in 1917, before returning to Liverpool twelve years later.

By 1929 the city’s Welsh population was estimated at 75,000 and a crowd of 7,800 attended the opening ceremony on Monday 5th August. There was some embarrassment for the Lord Mayor Alderman Miller though when his title in the programme was preceded by the words  ‘y bore’, meaning ‘the morning’. During his welcome speech he joked  ‘that is a new designation for me, although a lot of Lord Mayors have been and will be subject to adverse criticism.’

Amongst the guests on the opening day was an Australian delegation who had travelled to Liverpool specially for the occasion and presented a chair on behalf of all Welsh Australians. The competitions then began in earnest with Edna Rees and Grace Jones winning prizes for elocution and the Cory Workmen from the Rhondda Valley winning the brass band piece.

The Tuesday saw Cardiff’s Caradoc Pritchard crowned Bard of the Eisteddfod for the third successive year. Pritchard was then a journalist with a Welsh language newspaper who would go on to write the autobiographical novel Un Nos Ola Leuad (One Moonlit Night), which was published in 1961 and made into a film thirty years later.

By Wednesday 7th August the interest was so great that the crowd in the great pavilion rose to 12,000 for the chief choral contest, which carried a prize of £100. Entrants included Welsh expatriates now living in America, Canada and New Zealand. One of judges, Sir Ivor Atkins said that the presence of these choirs, who increased the total numbers of singers to 1,000, had raised the festival to international importance and it was the Port Talbot Choral Society who were crowned as the winners.

The following day’s proceedings were presided over by Liberal leader David Lloyd George, who was now the longest serving MP in the House of Commons and remains today the only person from Wales to have been Prime Minister. They included a ninety minute concert conducted by Dr D.H. Evans that was broadcast on BBC radio and an address by Rhyl born Sir Robert Jones, who had pioneered the use of radiography while being a surgeon in Liverpool in the 1890s. The attendance for this event was 14,000, the best of any of the six days.

On Saturday 10th August the festival was brought to a close with the male voice contest, in which choirs had to sing a a set routine of four songs without accompaniment. A Lancashire combination from Nelson and Colne took first prize, pushing Swansea and District into second place. Ross Richards of Ystelfara won the bass solo and Gwen Jones cello solo. This brought the event to a close, with crowds for the week having totalled 60,000.

Despite the huge crowds, the cost of staging the event meant a loss was made of over £1,000, the first time this had happened since 1900, when Liverpool was also the venue. The losses could have been worse but in some competitions the organisers actually withheld prize money if they thought the winners were still not of sufficient merit. One of the adjudicators Dr Granville Bantock bemoaned the lack of support from the English public and the Eisteddfod has not been held outside Wales since, although there had been some attempts (quickly quashed) to host it in Liverpool during the Capital of Culture year in 2008. 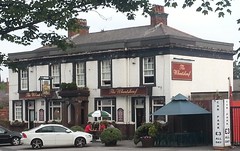