Newsham Park has recently played host to Royal De Luxe’s Giant Spectacular, but 123 years ago it was the venue for two weeks of stagecoach races, shooting displays and robbery re-enactments as Buffalo Bill rolled into town.

William Frederick Cody earned his title by killing 4,000 buffalo in eighteen months whilst hired to provide meat for workers building the Kansas railway. He then took his show on the road, touring America and Europe with shows which had a Wild West theme with one hundred a side battles taking place between Cowboys and Indians when space allowed. In 1887 the show was performed in London in front of Queen Victoria and there was great excitement at the prospect of him performing in Liverpool four years later. 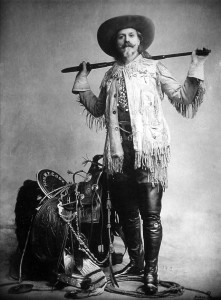 Cody and his cast of 240 men, 150 horses and 15 buffalo arrived in Liverpool after a successful run in Paris. They took up residence in Newsham Park, where a parallelogram was set up surrounded by 8,000 raised seats, while at the south end was a 4,000 seat covered grandstand. Entrance prices ranged from one to seven shillings, meaning all classes were represented at the shows, which took place twice a day for the fortnight. 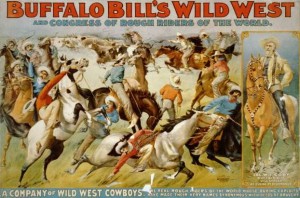 5,000 turned out for the first performance on Monday 6th July,which was opened by a performance by a Cowboy band. There was then a running battle involving Sioux Indians and Cowboys, then a race in which the riders were bareback on Mexican horses. Annie Oakley, a star in her own right, gave a shooting display in which flying objects were shot down, often with her not looking directly at them. Buffalo Bill then told stories of some of the battles he had been in and gave a demonstration of how horses were changed using the pony express, a pre railways method of getting news across the Wild West. 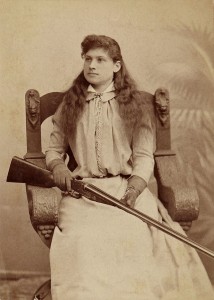 Another marksman was John Baker, who was able to load and fire a gun whilst standing on his head and hit a moving ball from that position. He was followed by some fantastic displays from riders on horseback, who treated the crowd to a display of lassoing and picking up fallen objects at full gallop. A re-enactment of an Indian attack on a stagecoach followed and the show closed with a demonstration by Buffalo Bill on how to catch them, with 19 of the animals being released into the arena.

The first show attracted rave reviews, with the Liverpool Mercury saying that it was a ‘stupendous exhibition’ and that ‘never before have we had in this city a vaster or more comprehensive entertainment than was seen here yesterday. The people of Liverpool have an opportunity of witnessing what might be said with truth to be a piece of the Wild West transported into our midst’.

Every day for two weeks Buffalo Bill entertained the crowds, with shows taking place at 3pm and 8pm, the evening performances lit up by an elaborate lighting system. Doors opened ninety minutes before to enable the crowds to take a look at the Indian village and frontier camp that had been set to house the troupe for a fortnight. Generosity was shown to local charities too, with 350 orphans from the Blue Coat School being invited on one day and occupants of the Aged Mariner’s Home on another.

It wasn’t just Liverpool people who attended, with railroads running special excursions from a number of towns in Lancashire. The large crowds though did lead to some unwanted attention from pickpockets. On Monday 13th a man named Joseph Shiel was observed by police officers trying to put his hand into the pockets of several spectators and he was arrested and put before the Magistrates’ Court two days later. Shiel had a record of acting in this way before and although he didn’t steal anything on this occasion, he was sentenced to three months hard labour.

Buffalo Bill then took his show to Croydon and in October headed to Glasgow, where he took up a three month residency in the 7,000 capacity exhibition buildings in Dennistoun. He then closed his European tour with a command performance for Queen Victoria and it was a decade before he returned to Europe, performing in Liverpool in 1903 for three weeks at a site off Edge Lane. 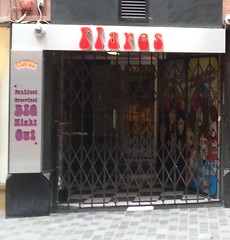