The statue above the main entrance to the old Lewis’s department store in Ranelagh Street has been the meeting place for many a courting couple. Affectionately known  as “Dickie Lewis’s”, it is also the “statue exceedingly bare” referred to in the song In My Liverpool Home, but what is the real name and origins of the iconic figure?

David Lewis opened his first business selling men’s clothing at Ranelagh Street in 1856, although the building was nowhere near as large as it is now.  An advert in the Chester Chronicle in June 1864 said that the shop, billed as Lewis & Company, sold “suits from fashionable tweeds and cloths, well fitting and handsomely made.” That same year the company branched into women’s clothing, using the concept of the department store, effectively several stores within a larger building.

In 1877 the first store outside Liverpool was opened in Manchester, and others opened in Birmingham and Sheffield in the 1880s. In that decade David Lewis died and Louis Cohen took over the business. The Ranelagh Street store was expanded when it took over neighbouring buildings in 1893 and then in 1923 it was completely rebuilt to become one of the largest department stores in the North of England. After suffering heavy bomb damage in World War 2 Gerald De Courcy Fraser, who had designed the 1923 structure, was again called upon to design the new building with work starting in 1947. 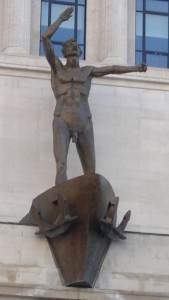 To signify how Lewis’s was at the forefront of the rebuilding of Liverpool after the war, and with the company’s 100th birthday approaching, it was decided to commission an imposing statue to stand above the main entrance. Sculptor Sir Jacob Epstein was appointed to do the work and he came up with a bronze cast of a naked man standing at the bow of a ship, defiant and proud. There was a mixed reaction, with some saying schoolgirls minds would be corrupted, but it went on to become part of Liverpool folklore. It hadn’t been the first time Epstein had caused outrage, having sculpted 18 nudes for the British Medical Association in 1908.

The statue is officially titled Liverpool Resurgent, but many a young couple courting simply told each other they would “meet under Dickie Lewis’s” in the days before widespread telephone communication. It stands over the main entrance and so many who see it are so drawn to it that they overlook the three mural panels below it, representing children at play, fighting and also in their pram.

From the 1990s the company went into decline and the Liverpool store was the last to remain open, eventually closing in 2007. The building has now been taken over by Merepark Developments and part of it has reopened as a hotel. There was never any danger of the statue being removed however, and Dickie will remain a popular meeting point and object of curiosity for visitors for years to come. 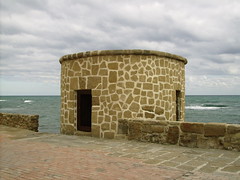 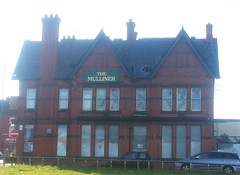