The Stanley Arms pub in Roby was once the venue for an athletics day held for staff of the London & North Western Railway Company who lived and worked in the Liverpool area. 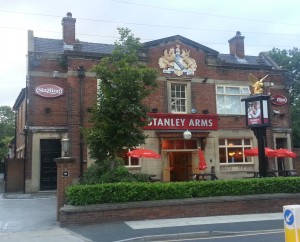 place on 16th June 1866 on a field next to the pub, with the landlord providing all refreshments and making the field ‘gay with flags and drapery’ according to the Daily Post. The idea behind the day was to cement the kindly feeling between employer and employed and the company laid on special trains for staff from Liverpool and surrounding areas.

Despite a cloudy sky and the occasional shower it was an enjoyable day, at which a band played between contests. The committee had put in a great effort to make sure everything run smoothly, especially the secretary Mr J Salter. All competitors went about their business in a sporting manner and no appeals were made at all to the arbitrator.

The races that took place were the 120 yards sprint, one mile run, one and two miles walking, hurdles and sack race. There was al

so what we would today term as long jump but was then described as leaping and vaulting. The only non athletic event staged was boxing. Medals were donated by merchant and local politician Robertson Gladstone (right), who lived at nearby Court Hey Hall.

After the presentation of the medals the competitors and guests, numbering 200 in total, sat down to dinner which was said to have reflected the ‘taste and credibility of the caterer.

The Stanley Arms pub is still there today, as is Roby station, but the London & North Western Railway company eventually became part of the London Midland region of the nationalised British Railways.