The first Juvenile Court in Britain opened in Liverpool in 1925, situated in a former chapel that is now student accommodation.

The Victoria Chapel, a Welsh Calvanistic chapel opened in 1880, being built to replace one in Pall Mall that was demolished to allow Exchange Station to be extended.It was in use for forty years before being sold to Liverpool Corporation and converted for use as a dedicated juvenile court. 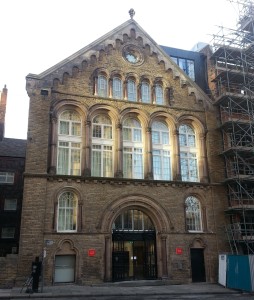 The first sitting was on 4th May 1925. Local Conservative politician Sir Archibald Salvidge presented the Lord Mayor with a golden key in commemoration and Stipendiary Magistrate Stuart Deacon welcomed the opening, telling reporters:  “This is the happiest day I have spent since I became Stipendiary Magistrate. Liverpool was once described as the black spot on Merseyside but I think that with these improvements I think it will be the brightest and happiest spot on Merseyside.” Home Secretary Sir Thomas Molony, Chairman of a Home Office Committee looking at the treatment of juvenile offenders wrote a letter of support which said: “A new spirit exists to deal with the young, with a juvenile court much can be done to eradicate the cause of these crimes”.

The opening of the new court meant that juvenile offenders no longer had to attend the regular courts and stand in the dock. Instead they sat at a table with the magistrates’ clerk, while police officers there wore plain clothes. The court looked to sentence youths in a different way looking at rehabilitation rather than pure retribution. One 12 year old for example who was set to be sent to an approved school in 1939 instead had his punishment suspended after pleas by his sister, who promised to persuade her parents to move to another district to get him away from bad influences.

It was a measure of the different way of sentencing that the first incident of magistrates sentencing juveniles to corporal punishment at the new court wasn’t until 1936, when 11 and 13 year old were ordered to be birched for stealing pens, a penknife and money from bathers at a swimming baths.

Three years later, one magistrate’s views on birching led to her being forced to withdraw from the bench. Stating her opinion that two eleven year old boys who had robbed a shop should receive six strokes every day for a week (a sentence that was not legal), she followed this up with an interview for a newspaper saying that it was the only punishment for wanton vandalism. The following week the defence counsel for four boys charged with housebreaking objected to her presence, saying that ‘it is perfectly clear that she has already made up her mind.’ After she withdrew from the bench for the case proceedings were delayed for an hour whilst another magistrate was sought.

The more hardline stances taken 11 years after the court’s opening may have been to do with the fact concerns were being raised by police chiefs about the leniency and relaxed nature of the court. A Magistrate’s meeting in June 1936 recorded that some offenders ‘treated the proceedings in jest’ and ‘had no fear of punishment.’

In 1937 one youth took advantage of the more relaxed security measures at the court, when he managed to make a dash for it after being sentenced to a spell in a detention centre. After first hiding in a cafe he climbed on to a roof and as detectives clambered up there after him, he tried to jump across an entry from one building to another, only to misjudge the distance and fall to the pavement. He was lucky to get away with some broken bones and a spell in the Royal Infirmary before going on to serve his sentence.

The building remained in use as a juvenile court until the 1970s, when youth facilities were transferred to Hatton Garden. After remaining empty for many years Vita Student bought the old chapel in 2012, along with Crosshall Building next door and the Tinlings Buildings on the corner with Victoria Street, which had recently been vacated by Liverpool city council. The interior of the chapel, which was no longer fit for purpose, was gutted and redeveloped with just the facade remaining. The old chapel and court saw the first students move in there in September 2013.