Brougham Terrace may be synonymous with many Liverpudlians of a certain age as the place where non church weddings took place, but it also goes down in history as the site of Britain’s first mosque, which opened in 1889. 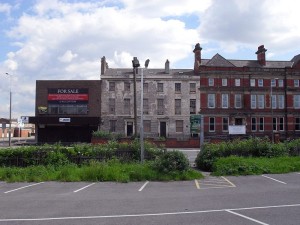 Twelve Georgian terraces were built at the top of West Derby Road in 1830 and named after Lord Chancellor Henry Peter, 1st Baron of Brougham and Vaux, who operated a law practice in Liverpool. Numbers 1-7 were demolished in 1900 so that the West Derby Union can be built, but 8-12 remained, with history already having been made eleven years earlier.

The son of a watchmaker, William Quilliam was born in 1856 and attended Liverpool Institute and then King William’s College in Isle of Man, qualifying as a lawyer. It was a trip to Morocco to recuperate from 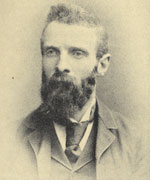 illness in 1887 that led to his conversion to Islam and on his return a Mr Hamilton was the first to follow him, changing his name to Ali. In 1888 Quilliam, who was the defence solicitor in several high profile murder cases, used the local press to announce his conversion to Islam and name change from William to Abdullah. He began lecturing on Islam at the Temperance League Hall in Mount Vernon Street and as the number of converts grew, he bought 8 Brougham Terrace in 1889. By now, converts included the Mayor of Stalybridge and a former Reverend, H.H.Johnson.

The Liverpool Muslim Institute opened on Christmas Day 1889 after architectural adjustments were made by Joseph McGovern. It was not just a place of worship, but somewhere that Muslims could meet and also where lectures and research could take place. Quilliam then bought numbers 9-10 for use as a Muslim boarding school for boys and day school for girls.

The first marriages and funerals were held there in 1891, with the Liverpool Review saying that it was unusual to see the Imam ‘clad in a suit of light tweed.’ Later that year though there was violence at the Institute when worshippers were pelted with mud and stones as they attended prayer, with the muezzin being hit by a snowball containing a stone. The man arrested for throwing it was a local Sunday School teacher.

In 1893 the Institute started publishing a weekly magazine, The Crescent, using its own presses. Soon afterwards Quilliam followed this up with Islamic World, a monthly publication distributed to twenty countries. These papers contained news from around the Muslim world and was an important source of information and gauging opinions at a time when many Muslims around the world were under British colonial rule. In 1899 Quilliam wrote Faith of Islam, copiers of which were ordered by Queen Victoria for herself and her grandchildren.

Qulliam was becoming known around the world for his teaching of Islam in Britain, with two converts setting off on a journey to Africa in 1894 to attend the opening of a mosque in Lagos.Their farewell assembly, attended by about 75 Muslims, was conducted in Arabic and Persian. In 1894 he welcomed Ahmed Fahri Bey, who was en route to the Chicago Exhibition on behalf of the Ottoman Empire. This led to Quilliam being recognised by the Caliph of the Ottoman Empire as Sheikh Ul Islam of the British Isles.

The following year the Emir of Afghanistan recognised him as the Sheikh of Muslims in Britain. This was after a visit to Liverpool by his son, the Shahzada (Prince), who was greeted at Newsham House by Quilliam at and others Muslims wearing fezs, turbans and veils. The Shahzada was interested in the treatment of Muslims in Britain and that evening at a reception in Liverpool Town Hall, where Quilliam said grace in Arabic, reciting the first surahs of the Koran.

So impressed was the Shahzada that he donated £2,500 to the Liverpool Muslim Society, allowing it to clear the mortgages on 8 Brougham Terrace and also purchase numbers 11 and 12. This also provided funds for the extension of the buildings into he courtyard where the new mosque would be located, allowing more rooms to be made available for studying and research facilities. Parts of the building were also converted into accommodation blocks for travelling Muslims.

By the turn of the century it is estimated that 200 people in Liverpool had converted to Islam, with another 600 nationwide. Quilliam’s standing worldwide continued to grow as in 1899 he was appointed Persian Consul in Liverpool by the Shah.

In 1902 Shareef Abdul Karim Murad Guardian of the Sacred Mosque in Medina and one of the most respected leaders in the Muslim world, visited Brougham Terrace and gave a lecture. A marriage conducted by Quilliam in 1905 had some unforeseen consequences. Clara Casey, a seventeen year old actress from Salford, fell in love with a Moroccan circus performer and married at the Muslim Institute without her parents consent. She then went with her new husband to Tangier, only to find that she was now part of a harem but was returned to England with the help of the British consul there.

The Muslim Institute in Liverpool came to a fairly abrupt end in 1908 when Quilliam was summoned to Constantinople in June by the Sultan and left within hours of receiving the telegram. Later that year, it became apparent that he had falsified evidence in a divorce case and was struck off as a solicitor. With Quilliam no longer being able to fund the Brougham Terrace buildings, the Institute came to an end and many of the converts moved to Woking, where Britain’s first purpose built mosque was situated.

Qulliam returned to England in 1914 under the name Haroun Mustapha Leon, splitting his time between London and the Isle of Man. When he died in 1932 he was buried at Brookwood Society in Surrey. 8 Brougham Terrace, which has a plaque on its wall, was eventually bought by Liverpool city council and used for civil weddings. Staff wondered for many years staff why a storeroom at the rear was known as the ‘little mosque.’ The building has been unused since 2000 but the Qulliam Society are seeking to restore the building and re-open it as an educational centre. Quilliam is seen by many Western Muslims as the inspiration for the path they have taken. 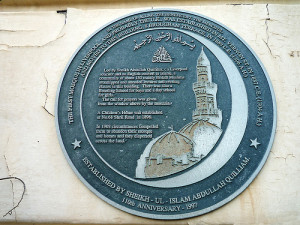