John Jackson, a member of the first cricket side to tour overseas, died in Liverpool’s workhouse in 1901 and is buried in the city’s Toxteth Park cemetery.

Jackson was born in 1833 in Bungay, Suffolk but his family moved to Southwell in the East Midlands while he was in infancy. After first playing for a local side he joined Nottinghamshire in 1855. Over six feet tall, he was a powerful but inconsistent batsman and occasionally a wicket keeper, but it was as a bowler that he became famous. Extremely fast with his right arm, his average in first class matches was one wicket for every 11.52 runs. The legendary W. G. Grace said that he ‘bowled like a machine, well within his strength and had a beautiful delivery.’ 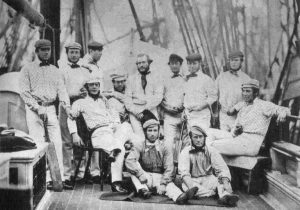 The England Eleven sailing from Liverpool, John is furthest right

In 1859 Jackson was selected for a tour of North America, the first ever foreign cricket tour. The squad was made up of the cream of English talent and usually billed as an England Eleven, although sometimes it was George Parr’s Eleven after their captain. They sailed from Liverpool bound for Quebec on 7th September, having been guests of Rochdale cricket club the preceding weekend.

Over two months matches were played in Montreal, Hamilton, Philadelphia, Rochester and New Jersey. The England Eleven were victorious in all of them but by the end of the tour the weather was getting colder and it was reported that the outfield players wore coats and gloves. In 1863 Jackson went to warmer climes, being selected for a tour of Australia.

A character on and off the pitch, Jackson celebrated every wicket he took by blowing his nose loudly, earning the nickname ‘Foghorn’. Sometimes he even warmed up for matches by drinking champagne that had been provided as hospitality. A burst blood vessel forced Jackson to stop playing county cricket in 1866 at the relatively early age of 33 and he went on to play for local sides. He then went into coaching at clubs in Burnley and Lisburn, then took up a position with Birkenhead grammar school. This led to him settling in Liverpool where he helped out at the club in Aigburth with grounds maintenance and catering.

Despite being awarded a benefit by his former county in 1874 which raised him £300, the equivalent of £30,000 in 2017, his later years saw him living in poverty. The 1891 census has him widowed and residing at a boarding house in Frederick Street, with his occupation listed as cotton porter. When he could no longer work he lived off the goodwill of friends, helped by donations from the Cricketers’ Fund Friendly Society. 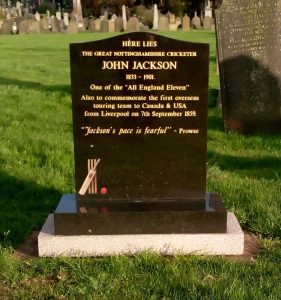 In between living with friends Jackson had spells in the workhouse and it was during one of these that he became ill in 1901 at the age of 68. On 4th November he died of syncope which had been brought on by the effects of a fall.  His funeral at Toxteth Park cemetery four days later was attended by seventy mourners, including Frank Sugg, a cricketer for Lancashire who also played football for Everton.

Although donations were invited for a headstone to be provided over his grave, it didn’t happen and it remained unmarked for over one hundred years. In 2009 a fitting memorial was finally erected following family research by his great great grandson who lives in Ellesmere Port.

ENGLAND’S SMALLEST HOUSE IN A PUB