In Mill Street, Dingle there is a building that is currently empty and had been a factory for a number of decades, which was once a theatre that could hold 1,100 people.

The Park Palace was opened in 1893 and designed by J H Havelock-Sutton. Initially opened as a theatre for variety shows, it was showing films by 1905 and four years later Kinematodrome was added to its title. For over fifty years variety shows and films were shown there, until it eventually closed in 1959 and became officers and stores for Crofts Engineers. 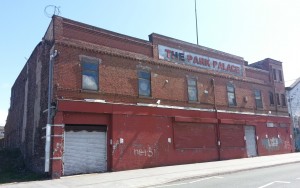 Amongst the first acts to perform in the summer of 1893 was Charles Coborn, most famous for his song The Man Who Broke the Bank of Monte Carlo, which he estimated to have sang 250,000 times in his music hall career. In 1901 a poster for a variety show on 11th February advertised performances by Scottish singer, songwriter and comedian Arthur Lloyd, with tramp cyclist The Great Campkin and chair balancer A P Boswell amongst the supporting acts. There were two performances a night over the week, one at 7pm and the other at 9pm, with admission prices ranging from three pence to one and a half shillings.

The boxes and balcony are now gone although the stage area remains, as does the Corinthian pillar flanked proscenium. Above this is a Royal coat of arms, commemorating a visit there by King Edward VII.

In October 2008 the Park Palace was brought back into use for a week by Zho Visual Theatre who put on a production of The Quiet Little Englishman, telling theatre goers to wrap up warm and apologising for the holes in the ceiling. They had hoped to redevelop the building but this has not been possible due to funding issues and the building is currently lying empty.

GLORIOUS PAST OF FUTURIST