The clocks in the famous Royal Liver Building are the biggest in the United Kingdom, despite being over 100 years old. They also contain some other superlatives, firsts and oddities, including being used as a dining table. 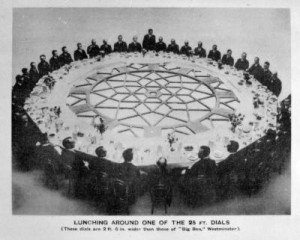 With over 6,000 employees, the Royal Liver Assurance Company were in need of larger premises and commissioned the building of a new office block at George’s Dock in 1908. The foundation stone was laid in May of that year and it took just three years to build. The architect was Walter Aubrey Thomas and it was one of the first major structures in the world to be built of reinforced concrete, a concept that was used for many of the skyscrapers of New York and Chicago.

The two clock towers were the crowning point of the building,taking it to over 300 feet in height and allowing sailors from all over the River Mersey to see what time it was. The four clocks were easy enough to see, as their diameter of seven and a half metres made them the largest clock faces in the country, bigger than those on Big Ben in London, which are 6.9 metres.

The clocks were made by Gent & Co of Leicester, whose electric timepieces were on display in railway stations all over the world. They each consisted of 27 sections Before installation, forty Royal Liver executives and civic dignitaries held a special dinner, with one of the clock faces used as a dining table. The huge clock faces, whose hands alone weighed 5cwts, were then hoisted up to the towers in May 1911 in readiness for the big switch on, which would see the clocks being controlled electronically from the Greenwich Observatory.

The clocks were started on 22nd June 1911 at 1.40pm, the precise time George V was crowned. It was the Royal Liver Chairman Mark Lewis who started them off, telling the VIPs gathered that Liverpool had always been loyal to kings and queens and it was only right that the largest electrical timepieces in the world should be started at the time His Majesty was crowned. On turning the lever, Mr Lewis said ‘In the name of God I turn on this lever’ before his suggestion that they be known as he Great George Liver Clocks was greeted with warm applause. On the river ships’ sirens blew while on the ground several verses of the National Anthem were sung.

The building then opened officially on 19th July of that year by Lord Sheffield, on a day when over 2000 agents of the company were taken on board Mersey ferries to the entrance to the Manchester Ship Canal and then New Brighton. 270 delegates were given a tour of the building, being shown the innermost workings of the heating and ventilation systems, lifts and clocks, with some expressing surprise that they neither stroked nor chimed.

In 1953 electric chimes were added to the clocks in memory of Royal Liver staff who had been killed in the two world wars. They remain the largest clock faces in the United Kingdom today, but are a long way behind the largest in the world, which are a massive 43 metres and situated on the Abraj Al Bait Towers in Mecca, Saudi Arabia.