The old Main Bridewell (opened 1859) is currently undergoing conversion to desirable student accommodation, but its past use meant that the occupants wanted to be there for as little time as possible and there were several daring escapes in days gone by. 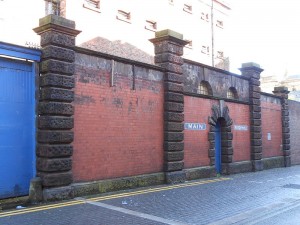 There was considerable embarrassment in 1865 when three men got out on a cold January morning without attracting the attention of the two keepers on duty. All were observed to be in their cells at 1am but one of them managed to use wire to open the hatch in the cell door through which food was served, before reaching out and turning the key to the main lock. He then simply opened the doors of the two adjoining cells and the three men made their way into the yard and scaled the walls. Even then they weren’t completely free as this took them into the grounds of the fire station, but escape from there was easily done with the aid of one of the many ladders that were present and nobody seemed to notice.

Despite completing such a daring escape, one of the three men, named as John Murray, gave himself up that very afternoon. After spending a few hours drinking in pubs, he walked to the gates of Walton Gaol and told an official he was an escaped prisoner. Initially no notice was taken of him but when the deputy governor recognised him as a frequent inmate he was taken to the Magistrates Court in Dale Street. He told the Stipendiary Mr Raffles that the other two prisoners –  Joseph Banks and William McShane had gone to Manchester and it then transpired that Murray had recently escaped from the asylum at Rainhill. When he was told that he would be sent back there he turned violent in the dock, having to be restrained by two officers, which only confirmed the decision that he should be in an asylum not the mainstream gaol.

The lessons of the escape by opening the hatch with wire weren’t learned and just the following month, another prisoner got out of his cell using exactly the same method.  On this occasion the governor was walking around when he noticed the cell door of Peter Stephenson, on remand for robbery, was open and the prisoner nowhere to be seen. Whereas the previous escapees had gone downwards into the yard, he had gone to the higher levels and after making it onto the roof he found there was no way down and he was recaptured abut an hour later.

At the end of March one of the three escapees from January, Banks, who also went by the aliases of Mick Flannigan and Newcastle Mick was arrested when he was arrested after a burglary at the Bishop’s house at Chester, in possession of His Grace’s gloves. Unbelievably whilst he was lodged in Chester Castle awaiting trial, he escaped leading to a telegram being sent to the Liverpool police asking them to look out for him.

There were times when the prospect of a spell in gaol led to prisoners taking their own life. In August 1897 Harry Parkinson, manager of a furniture shop in Breck Road was arrested after his employer accused him of taking money to pay for goods that didn’t exist. Unbelievably, Parkinson was taken into the Bridewell whilst in possession of a revolver and as he was being booked in by the desk sergeant he shot himself dead.

Two months after Parkinson’s suicide, 65 year old Dr Richard Johnson was taken to the Bridewell after he was unable to pay £200 in back maintenance payments to his estranged wife. When he was removed to the Bridewell for being in default, he swallowed prussic acid that he had smuggled in, dying almost instantly.

Currently the Bridewell is being redeveloped by Jamworks into 15 student flats, containing 86 rooms in total and although some original features of the building will remain, the occupants will be able to come and go as they please