Fanny Calder, one of the most influential women in the education of females lived in Liverpool’s Canning Street for sixty years. 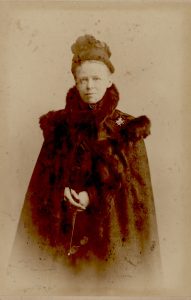 Fanny Louisa Calder was born to American parents on the 26th March 1838 in Rodney Street in Liverpool. She then later resided at 54 Upper Parliament St but was living in 49 Canning Street by 1861 with her mother and three sisters. In her young life she partook in in women’s voluntary work, teaching in Sunday school for Anglicans, and also by running a Bible class for mothers.

She set up the Liverpool School of Cookery in 1875 with classes at St Georges Hall, her aim being to improve the diets and lifestyles of the people of Liverpool by teaching them how to cook and clean and look after themselves. There were 58 members on the committee including the countesses of Sefton and Derby.

Within a couple of years premises had been secured in Colquitt St, where women were taught about cooking and then took their skills into the hearts of communities. Fanny would also go and teach girls in the industrial schools. They were given practical demonstrations and asked to take notes, then the following week they would have to come back with neatly handwritten instructions and bake themselves.

With her progress in Liverpool, Fanny wanted to promote women’s education throughout the UK and so worked with similar institutions in Edinburgh, Glasgow and Yorkshire, resulting in the 1876 formation of the Northern Union of Training Schools of Cookery. The women’s education movement founded its first national organisation in 1897, in which the the Association of Teachers of Domestic Science Fanny played a fundamental role. 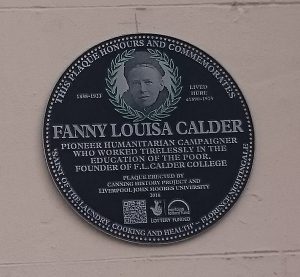 Throughout her life Fanny wrote numerous articles and letters about her mission of bringing domestic science into the education system whilst also promoting the distribution of affordable cookery books produced at the school. She also co-authored with the head teacher at the cookery school, E.E. Mann, the first laundry work teaching manual, ‘A Teachers’ Manual of Elementary Laundry Work’ published in 1891. If you have £94 to spare you can get a hardback copy off Amazon. By the 1890s she was rolling out classes in laundry, dressmaking and millinery, all under the banner of ‘housewifery’, and was able to subsidise fees by getting grants from the likes of the Rathbones, Booths and Tates.

In a letter to Fanny in 1892 Florence Nightingale referred to Calder as the “Saint of the Laundry, Cooking and Health” in reference to who outstanding work in promoting the teaching of the domestic sciences throughout the UK.
By 1903 Fanny was such an important figure in women’s education that she was invited to join the Liverpool Education Committee. In 1913 she was given an honorary MA in Education from the Liverpool University for her achievements in creating and improving women’s education throughout her 50 years of teaching.

During World War 1 she ran cookery classes in Colquitt St aimed at making the most of what was available on little income given men were away at the Front or worse, killed in action. Fanny wrote a number of recipes herself, the most well-known being her War Cake recipe. Her original hand written copy of whi 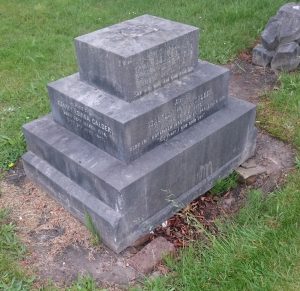 ch is currently held in the Liverpool John Moores University Archives. On Light Night Liverpool this year, 500 slices were baked and given away by JMU students.

In 1920 Fanny was no longer able to fund the school so handed it over to the Liverpool Education Committee who renamed the school the F.L. Calder College of Domestic Science. This eventually merged with other institutions to form Liverpool Polytechnic, which is now Liverpool John Moores University.

Fanny Calder remained a spinster all her life and passed away on 6th June 1923. She was buried in Smithdown Road Cemetery alongside two of her sisters, who had also never married.