Father James Nugent was a pioneer for child welfare, poverty relief and social reform whose lasting legacy continues today through the work of the charity  Nugent Care, which operates throughout Merseyside and the North West.

Born in Hunter Street, Liverpool in 1822, the son of a grocer, he was one of nine children and educated privately. James turned away from the career in business that his family had planned for him, instead training as a priest in Durham and studying in Rome. He was ordained at St Nicholas’s in Copperas Hill Liverpool, where he had been baptised, in 1846. He went to serve as a curate in Wigan and Blackburn then returned to Liverpool as curate in 1849. 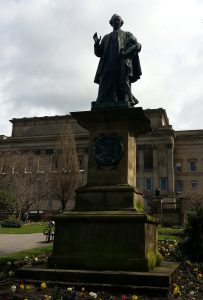 Life in Liverpool was bleak in the 1840s. Huge numbers of Irish people had moved to the city as a result of the Potato Famine. The poor lived in close quarters, were ill-nourished and didn’t attend school, so disease was rife. Horrified by the life of poverty they endured, Father Nugent concentrated his efforts for the rest of his life on encouraging those with prestige, money and influence to help the deprived.

As curate of St Nicholas’s, he first opened a ragged school followed by a night shelter and refuge in Spitalfields, for which there was clearly a massive demand. In the early 1850s he brought the sisters of Notre Dame to the town. They opened a teacher training college in Mount Pleasant so that teachers could be trained to go out into the slum areas and teach children. In 1853 Nugent set up the Catholic Institute at 26 Hope Street, living there himself. This eventually became part of St Edwards College. At that time, only 5% of Catholic children in Liverpool were receiving an education.

As a result in the late 1860s  Father Nugent opened The Boys’ Refuge, a residential certified industrial school in St Anne Street teaching shoe-making, tailoring, joinery and printing. When we say printing, examples are printing of paper bags for businesses, publicity posters. Between its opening in 1865 and its closure  five years later, 2,000 boys learned a trade here.

His work as the first appointed Catholic chaplain to Walton Gaol, a position he held for 22 years, spurred him on to oversee the opening of a refuge to help women released from prison in 1891, this was run by the Order of Poor Servants to the Mother of God. He also established a home for mothers and babies, the House of Providence in Dingle. In the first year 33 others found shelter. Another example of him helping those in trouble with the penal system in 1891 was when a ten year old boy was drowned in Stanley st by two friends. It was agreed with the judge for the two killers to be placed into his care for a year.

He promoted the use of Penny Savings Banks to help the poor set aside money when they could for hard times. His League of the Cross for Total Abstinence spread across the world, him feeling drink and the money spent on it was a great social evil, as far as India and Australia, and he helped many destitute Liverpool people to emigrate abroad in search of a better life, the first in 1870 was 24 to Canada and in 1880 he took 300 from Galway to Minnesota.

He was made a Monsignor in 1890 and was held in such high esteem by the citizens of Liverpool that on 5 May 1897 at a special ceremony at St George’s Hall, he was presented with a portrait of himself at a public meeting which was attended by thousands. By now he had retired from priesthood and was mainly lecture touring.

He died at the aged 83 on 27th June 1905 at Harewood House, Formby from pneumonia. This was following a bad fall on RMS Oceanic on his return from a trip abroad. His funeral was huge, with thousands coming to pay their last respects as he was buried in Ford Cemetery. On 8 December 1906 this a statue of him was erected in St Johns Gardens, Liverpool, commemorating all he had achieved in his lifetime as an:

“Apostle of Temperance, Protector of the Orphan Child, Consoler of the Prisoner, Reformer of the Criminal, Saviour of Fallen Womanhood, Friend of all in Poverty and Affliction, An Eye to the Blind, a Foot to the Lame, the Father of the Poor”.

Present for the unveiling by Richard Durning  Holt (local shipowner and Liberal politician) were the Lord Mayor and Bishop Whiteside, the most senior Catholic churchman. The statue was by F W Pomeroy and depicts Father Nugent in clerical garb, having frowned expression of concern for the boy who is in poor dress and barefoot.

Today Nugent Cares mission statement says ‘We offer a diverse range of support to adults and children through our schools, care homes, community and social work services and social enterprise. We work at the heart of some of the most vulnerable and disadvantaged communities. We strive to generate interest, awareness and understanding of issues around poverty and social welfare and the impact of this on our wider communities”.