Temperance campaigner Theobald Mathew, more commonly known as Father Mathew, paid a number of visits to Liverpool in the middle of the 19th Century.

Mathew was born in County Tipperary in 1790 and schooled in Kilkenny. After being ordained as a priest in Dublin in 1814, he settled in Cork. In 1838 he set up the Cork Total Abstinence Society which by the end of the year had enrolled over 100,000 members who had pledged to totally abstain from all ale, wine and liquors, unless needed for medicinal purposes. John Maguire, writing a biography of Father Mathew in 1863, credited this movement with reducing the number of people being sentenced by the Irish courts to transportation from 916 to 504 over a seven year period.

By the time of the outbreak of the Irish famine in 1845 three million people, more than half the adult population of Ireland, had taken the pledge. Father Mathew’s reputation had also spread across England too, with a tour in 1843 involving a visit to Liverpool.

Father Mathew landed in Liverpool at the beginning of July but continued to York where he attended the Conference of Northern Teetotallers. He then went to Leeds, Bradford and Huddersfield and Manchester before arriving in Liverpool at 3pm on Saturday 15th July, taking up residence at Brown’s Temperance Hotel in Clayton Square. That evening he addressed an audience at a teetotal festival, speaking for forty minutes despite having a cold and being very hoarse after a week in the manufacturing towns. He praised the spread of teetotalism in Liverpool and pointed to the example of Ireland, where crime was down and Smithfield prison in Dublin had closed. At the end of his address, he then administered the pledge to thirty men and women who came on stage.

The following day Father Mathew gave two sermons at St Patrick’s Chapel in Park Road. Although he was a Catholic priest, his visits were non sectarian and an English flag flew from the chapel with verses attached from local Unitarian ministers encouraging attendance.  Amongst the Protestants who came 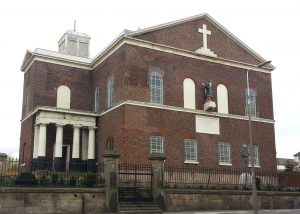 along were philanthropist William Rathbone and the local stipendiary magistrate Edward Rushton. After each sermon, Father Mathew addressed crowds from outside the chapel and administered the pledge to an estimated 6,000 people. The Liverpool Mercury reported that there was one unsavoury incident nearby outside St Jame’s Church, where a ‘respectable looking individual’ was attacked and beaten by a group of ruffians, who trampled all over his temperance medal, which had appeared the main cause of offence.

On the Monday morning Father Mathew was at St Anthony’s in Scotland Road by 7am, where a large crowd was already gathered ready to receive the pledge. He then delivered sermons inside the church before coming back outside around 11.30am to give an address in which he said men and ladies of all classes had taken the pledge and even called for Queen Victoria to do so. Local churchmen then spoke and praised the work of Father Mathew and told the crowd that those who took the pledge would bless the day they did so. He  then spent six hours administering the pledge before going to St Peter’s in Seel Street for a prior engagement. After that he went back to St Anthony’s and continued administering the pledge until after 9pm. Over the course of the day, 10,000 had taken it.

After spending the night in Clayton Square Father Mathew was back at St Anthony’s the next morning to continue administering the pledge. He retired at 10am to preach a sermon and then spent the rest of the day and evening giving the pledge, only stopping at 10pm. Even then, there were thousands still waiting but sheer exhaustion had forced him to stop. Over the course of his three days in Liverpool, Father Mathew said he had administered the pledge to 30,000 persons, but newspaper estimates put it at nearer 40,000.

Father Mathew then spent six days in Manchester before returning to Liverpool on Tuesday 25th July, heading straight for St Anthony’s where he immediately began administering the pledge, 8,000 attending over the day. The next day he was there for twelve hours, much of which was spent standing outside in the rain. During the evening, guest speakers from Cincinnati and Boston addressed crowds of 20,000 on the benefits of teetotalism.  By the time Father Mathew left Liverpool for London on the Thursday morning, 60,000 people in Liverpool had pledged to be teetotal.

For the next month six weeks Father Mathew spent time in London, Birmingham and Norwich. Although Father Mathew was open to seeing anybody willing to listen to his sermons and take the pledge, it was inevitable that most of those attending were Irish Catholics.  Many of those received the pledge in Irish and temperance marches did take place in many towns. However, Liverpool’s Mayor Robertson Gladstone would not allow one in Liverpool in case it triggered counter marches by Orangemen and his Manchester counterpart did the same. One politician who went further was Lincoln’s MP Colonel Sibthorp who addressed Parliament and referred to the visit as an ‘invasion of banners and Papist priests’ and demanded to know what the Home Secretary Sir James Graham would do about it.  Graham was quick to dismiss Sibthorp’s concerns, saying that Father Mathew was harmless and nobody should object to the pledge being taken.

During his tour Father Mathew breakfasted with former Prime Minister the Duke of Wellington who was now Leader of the House of Lords. He was also invited to spend time with current Prime Minister Robert Peel, but the invitation reached him too late. Father Mathew finally arrived back in Liverpool on 13th September and spent a few days recuperating in Clayton Square before sailing to Dublin. 300,000 are believed to have taken the pledge whilst he was in England.

Father Mathew was next in Liverpool in May 1849 when he sent five days with William Rathbone at Greenbank before heading to America. During his sta

y he celebrated High Mass at the Convent of the Sisters of Mercy in Mount Vernon and gave the pledge to visitors at the Hibernian School off Mount Pleasant. On 23rd May he boarded the Ashburton at Waterloo Dock bound for New York. He spent two and a half years across the Atlantic, visiting 300 towns and cities in 25 states and administering the pledge half a million times. For his return journey Father Mathew and his two secretaries were granted free passage on board the Pacific, which arrived in Liverpool from New York on 19th November 1851. He was in good health but still in need of rest and stayed with William Rathbone for a week before departing for Dublin.

Father Mathew’s final visit to Liverpool was in October 1854, when he was in very poor health and had been for several months. He undertook no public engagements and was instead visited at Greenbank by Richard Sheil of the Liverpool Catholic Club and James Whitty of the Irish Catholic Club. They presented him with £100 to help him with his expenses as he continued  about his recuperation, which now involved heading towards the warmer climes of Madeira on the Imperador, which sailed from Liverpool on the 27th of the month.

After seven months in Madeira, Father Mathew returned to the British Isles the following June. He did not transit through Liverpool however, landing at Southampton before going on to Cork. His health never fully recovered and he died on 8th December 1856 at his home in Queenstown. All the buildings where he gave the pledge in Liverpool – St Patrick’s, St Anthony’s, St Peter’s and the Hibernia School are all still standing, although only the former two are used for their original purpose.