In 1941 there was a non war related tragedy when a Liverpool policeman and four members of the same family were killed in a house fire in Dingle.

In the early hours of Saturday 29th March that year a fire broke out in the kitchen of a house in Laxey Street, Dingle (below left). Believed to have started in the coal grate, it quickly spread upstairs trapping husband and wife James and Annie Campbell, as well as three of their children who were aged between nine and fifteen. 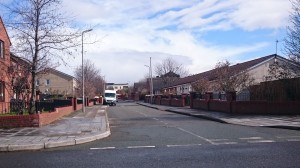 A neighbour flagged down a vehicle on Park Road and the driver went to Essex Street police station, where two officers notified the fire brigade then raced to the scene in a patrol car. One of them, Constable Thomas Benn, smashed a downstairs window and fought his way through the dense smoke to the stairs, which were partly ablaze. Disregarding his own safety Thomas dashed through the flames up to the front bedroom, where he assisted James and daughter Maria in jumping from the window to safety before moving on to the back bedroom.

James, a merchant seaman, broke a leg in the fall and was carried by neighbours and a passing soldier into a house to await an ambulance that took him and Maria to hospital. Benn’s colleague Constable Lacey then entered the house but was beaten back by the flames.  When firemen arrived they managed to rescue Lacey, who was badly burned, by leading him through a window. When they entered the house they first found the body of Mrs Campbell and on the bed were the bodies of fifteen year old daughter Annie and nine year old son Patrick. They had died in the arms of Constable Benn, who also perished while trying to drag them to safety.

Constable Benn was twenty five years old and lived with his wife Daisy in Glendevon Road in Broadgreen. A keen rugby player, he had been in the police for four years and was expected to have a bright future in the force. Tragically, this was the second death in his family within a matter of weeks, his fireman brother having died a few weeks before whilst on duty in Manchester. The death toll rose to five when James Campbell died in hospital in the early hours but Maria made steady progress. A thirteen year old daughter had been staying with relatives while another son was away at sea with the merchant navy.

The inquest was opened on 31st March but only to confirm identification of the deceased. It did not resume until 11th June, when Constable Lacey gave evidence whilst lying on a stretcher. Recoding a verdict of Accidental Death the Coroner, Mr Mort, concluded that the fire service had done all that it could in the circumstances and praised the selfless act of Constable Benn. His superintendent expressed regret that only two lives could be saved and offered his sympathy to the relatives of those who died.  Constable Benn was later posthumously awarded a Kings Police and Fire Service Medal for Gallantry.

For more information on the Liverpool fire service below book is available on Amazon.

THE MAURETANIA EXPLOSION OF 1914