It may seem strange that a school in Liverpool is named after a Surrey born poet, but that is the case with Matthew Arnold Primary in Dingle. It is named in relation to the fact that Arnold died near there in 1888, but that was not his only Liverpool connection.

Arnold was born in Laleham-on-Thames in 1822 but moved to Rugby in 1828 when his father Thomas Arnold became headmaster of Rugby School. After attending preparatory school as a boarder back in Laleham and a period of private tuition , Arnold went to Winchester School aged 14 and then a year later became a pupil at Rugby, where he remained until he was 19.

He then attended Balliol College at Oxford University from 1841, renewing an acquaintance with Arthur Clough who was three years older than Arnold but been at Rugby since he was ten. Clough had been born in Liverpool at 9 Rodney Street and the two men’s passion for poetry meant they remained friends and correspondents for life. Despite his younger age, it was Arnold who was published first, having edited Fox How Magazine with his brother since 1838, including poetry that he had written.

After graduating and teaching at Rugby for a short time, Arnold was awarded a fellowship at Oriel College in 1845, joining Clough in tutoring. This position allowed him a lot of free time to read, write and travel. He visited Ireland and France and then became a private secretary to Liberal peer Lord Lansdowne in 1847. Generous holiday allowances allowed him to travel to the Continent frequently and he also published his first book of poetry The Strayed Reveller and Other Poems, in 1849.

Arnold was appointed Inspector of Schools by Landsdowne in 1851, a position that required lots of travel around the country, but also gave him considerable financial security. Within two months of appointment he married Fanny Lucy Wightman, the daughter of a judge and they had six children together, although three died in childhood. Further collections of poetry were published that decade – Empedocles on Etna and Other Poems, Poems and  Poems, Second Series. 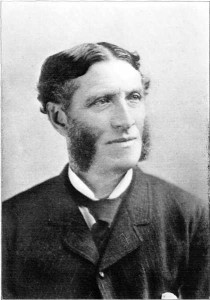 The school inspector post would remain Arnold’s main role for the rest of his life, whilst his writing took new directions.In the 1860s he became much more critical, publishing  Lectures on Translating Homer, Last Words on Translating Homer and Essays on Criticism. The 1870s saw him move on to theology, bringing out Literature and Dogma and Last Essays on Church and Religion. In 1883 Prime Minister William Gladstone, who had been born in Liverpool at 62 Rodney Street, awarded Arnold a pension of £250 per year although he continued in his post. He was fit and well, looking ten years younger than his real age and twice toured America (in 1883 and 1884) to give lecture tours, before finally retiring in 1886. On 22nd May that year he sailed from Liverpool for New York to visit his daughter in America.

Arnold’s death in Liverpool was a sudden one. He was in the city to meet his daughter of a liner from America, where she was now living with her husband. He stayed in Dingle Bank, a private estate that contained the home of his sister Susan, who was married to John Cropper who came from a family of shipowners. On Saturday 14th April he went for a walk and despite some heart problems jumped over a fence, apparently without difficulty. The following day however, he was walking with his wife to catch a tram to the docks to meet his daughter, but collapsed. He was taken back to the house and a local doctor called but he was pronounced dead, a heart attack having been the cause.

On Wednesday 18th April Arnold’s coffin, which bore a simple brass plaque engraved with his dates of birth and death, was taken to London on the 11am express train, accompanied by his widow and three children. The following day his funeral took place in Laleham and he was buried in the family plot in the graveyard of All Saints Church.

A primary school opened opposite the entrance to Dingle Bank in 1908, and in the 1920s it was renamed Matthew Arnold. The current building dates from 1999. Arnold is also commemorated nearby by a City of Liverpool Heritage Plaque on the wall of the nearby Alfred Stocks Court housing scheme, named after a former Chief Executive of Liverpool City Council. Staying in L8, there is also a road is named Arnold Crescent off Upper Warwick Street. The private estate of Dingle Bank, where Arnold died, is long demolished and Shorefields Village now stands on the site.