The people of Liverpool are lucky to have proximity to beaches at New Brighton and Crosby, but over 200 years ago they didn’t even have to go that far. Back then the town had ample bathing facilities near to Princes Dock, including the largest bath in the world, making the area popular amongst locals and excursionists alike.

In 1792 a public meeting of merchants, tradesmen and other inhabitants was conveyed at the Exchange overseen by the Mayor at which a number of resolutions were agreed. One of them was for the erection of a public baths, as visitors were coming into the town every summer to bathe. In an address to the Committee for Conducting Improvements, one merchant said:

“Among the variety of interesting objects for the welfare  of the town that occupy your attention, the erecting of baths for sea-bathing deserves your immediate consideration. The town of Liverpool, in point of situation, is certainly inferior to  none for these salutary conveniences, which, if carried into  execution upon an extensive scale, there is no doubt of its soon  becoming the first sea-bathing place in Britain. The valetudinarian, and man of business and pleasure, would certainly give a  preference to Liverpool to any other place in this part of the  kingdom; the air is considered extremely salubrious, and its central situation, being surrounded with manufacturing counties, whose inhabitants have connections with the merchants and traders of this town, must always incline them to visit where  interest and pleasure are so intimately blended.  The theatre, concerts, docks, and improvements, present a variety of amusements, and for pleasant rides, the shores cannot be excelled.  It is a disgrace to this opulent and spirited town, that it has  been so long destitute of public baths; the present mud holes, under this appellation, are disgusting to mention, and  the inhabitants have a right to expect better accommodation.”

A shipbuilder in the town named Mr Wright owned land to the north of George’s Dock, where Princes Dock now stands. He quickly built some baths but they were purchased and improved by the Corporation in 1794. Individual dressing rooms for men and women were constructed, each having their own private bath, which connected into the larger public one if the bather preferred. There were also steps for anybody that wanted to go into the open waters of the River Mersey. The Corporation claimed that they were ‘much superior to anything of this kind in this part of the Kingdom’, comparable to facilities at Margate and Brighton.

The baths attracted visitors from Liverpool and across the county of Lancashire but not everyone was impressed with the baths.Writing in 1810 London based journalist John Corry noted that ‘Numbers of the lower class, however, not only of Liverpool, but from the manufacturing districts, even to the very extremity of the county, annually exhibit themselves along the shore, bathing promiscuously, without much regard to decency.’

Bathing was generally seen as good for the body and soul, but few physicians engaged in it, perhaps because it was acknowledged that the waters of the Mersey were not the ‘most limpid and pure.’ This didn’t stop people coming though and there were plenty of hotels along the shore which did a good trade from visitors. One of them was owned by a Dutchman named Mr Vandries who had a street named after him.

The issue of decency was part addressed in June 1816 with the launch of a floating bath by local businessman Mr Coglan, who raised funds by asking merchants to pay £20 subscriptions which would then allow four years of free bathing. The bath was floated just off Regents Dock and allowed for bathers to swim away from prying eyes on the shore.  The water was six feet at its deepest and three feet at the lowest depth, making it accessible to all whether or not they could swim. The bath measured 26 by 82 feet and was believed to the largest in the world. Even when the Corporation opened new public baths in the early 1820s after the old ones were cleared to make way for Prince’s Dock, they still weren’t as big as Mr Coglan’s enterprise. 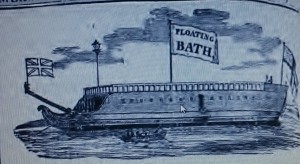 By the 1840s Liverpool was no longer a bathing resort due to the continuing northward spread of the docks. Bathers now face a 5 mile trip to go in open water, as the shores at Dingle were inaccessible to the general public. The Corporation baths provided somewhere for locals to bathe, but the floating bath was now having too much of an impact on shipping. Too many times ships struggled to navigate their way out of the river due to its presence, while ladies on the increasing number of ferries between Liverpool and Wirral complained of naked men running along the decks.  Over 500 per day would use it in the summer months and in nearly thirty years there was not one fatality, compared to numerous amongst those who would bathe in the open water. In July 1843 though it was removed on the orders of the Harbour Master.

As Liverpool developed into the busiest port in the world, on the other side of the river New Brighton became a resort that was within reach. The land there had been purchased by Everton resident James Atherton in 1830 and development soon gathered pace, the pier opening in 1861.