Broadcaster Ray Moore, whose voice was familiar to millions of radio listeners first thing in the morning, was born and raised in Liverpool and died at the age of just 47 in 1989.

Born in 1942, the first seven years of Ray’s life were spent in Cherry Close, Walton, where he began his education at Florence Melly school.  In 1949 Ray moved with his mother and two siblings to Waterloo when his parents separated  although they did reconcile the relationship a few years later. He attended St Luke’s primary school Waterloo Grammar, and would live there until he left Liverpool in the early 1960s to pursue his career ambitions. 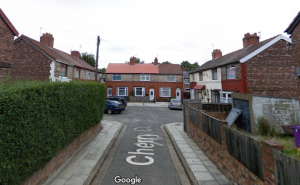 Ray became fascinated by radio as early in 1945, when he listened to the VJ Day celebrations. He only ever wanted to work in broadcasting and took elocution lessons in Rodney Street. After passing his ‘A’ Levels in 1960, he worked briefly for the Mersey Docks & Harbour Board first as a labourer and then as a checking clerk, an office role he hated. Knowing he had no ties or responsibilities, Ray resigned his position, much to his father’s dismay, and joined the Oldham Repertory Theatre as an assistant stage manager.

After three years working in theatre and having some minor acting roles in Oldham, Dorset and Swansea, Ray took a chance whilst changing trains in Manchester and walked into Granada TV asking if there were any announcing jobs. He was told there were none available at present and his details were taken, which he saw as  ‘thanks but no thanks’, but ten days later he received a telegram asking him to contact them urgently.

Initially filling in for someone who was off sick, Ray would stay with Granada for two years. A fellow announcer of was Bernard Youens, who would later gain fame as Stan Ogden in Coronation Street. Bernard was as workshy as his famous character and Ray was more often than not happy to cover his shifts to gain more experience.

In 1965 Ray had a brief stint with a TV in Birmingham before successfully applying for a role in the newly launched BBC2. He would work at their Manchester studio in the continuity suite as well as doing the voiceovers for a number of light entertainment programmes. It was while working there that he fell in love with Alma Mather, a BBC librarian. As Alma was already married with a son however, he resigned from his post in the autumn of 1967 to avoid any scandal.

Alma sacrificed everything, leaving her family behind and moving to London with Ray.  Just as they were about to become totally destitute an acquaintance from Manchester  fixed up a position with BBC radio and Ray joined as a newsreader. He went on to do voiceovers for various radio and TV programmes, including Come Dancing and the Eurovision Song Contest, before being handed his own early morning show on Radio 2 in 1980.

As host of the early morning show, Ray received an audience of up to 5 million listeners. His warm, kind and humorous personality made him popular with an audience who were made to feel they were in the same room as him. Although he did lots of television voiceover work, Ray never entertained the idea of going in front of the camera. He told the Liverpool Echo in 1985 “On radio there is nothing between you and the listener, on television there are batteries of lights and armies of men that all get in the way.”

In 1986,  whilst on a train returning from an outside broadcast, he came up with the idea of the Bog Eyed Jog. This was a sponsored fun run for Children in Need, taking place at 5.30am in sports stadiums around the country. It seemed a ludicrous idea, but despite the early hour in November, thousands turned out to run with Ray in Belfast, Birmingham, London and Manchester. He even released a record associated with the event, O’ My Father Had A Rabbit, which spent seven weeks in the charts peaking at number 24.

Ray’s world was turned upside down in the summer of 1987. After ignoring a lump under his chin for several weeks, he finally sought medical advice when shaving became difficult. A cancerous tumour at the floor of the mouth was diagnosed and he was given a life expectancy of about two years. Ray declined a gruelling course of radiotherapy that may extend life by another year but with serious side effects. These included some facial reconstruction and the removal of part of his tongue and jaw that would have made speaking extremely difficult.

Only close friends and family members knew of Ray’s cancer battle. He continued with his show, growing a beard to disguise the tumour and the Bog Eyed Jogs took place again in November 1987. By the following month however the tumour was becoming increasingly uncomfortable, affecting his speech and occasionally weeping, having broken through the skin. On one occasion, it wouldn’t stop bleeding and the staff at the Charing Cross Hotel, where he had gone into the toilets, feared something violent had happened on seeing the trail of blood.

On 24th January 1988 Ray did the voiceovers for the Laurence Olivier awards and returned home to find Alma in tears and shaking her head. He knew that the time had come to make his bosses aware of the gravity of his situation. A few days later, whilst making a dedication for a lady called Arrowsmith, he pronounced it as Allowsmish. Later that day, which was a Thursday, his producer called the Head of Radio 2, Frances Line, to say that Ray would no longer be able to continue broadcasting after the weekend. Sadly, he was not even allowed to do one last show, Line deciding instead to bring in a replacement for the following morning and issue a press statement. He was devastated at the decision, but comforted by the enormous amount of well wishes he received.

After the announcement was made, Ray said that he was determined to fight the cancer with homeopathy and attributed contracting it to smoking, diet and lifestyle. He then wrote a best selling autobiography, Tomorrow is Too Late. In September 1988 he made what would be his last visit to Liverpool, signing copies of the book at WH Smith in Church Street. In an interview with Linda McDermott of the Liverpool Echo, he described death as “a blue devil on his shoulder” that he was “determined to give a run for its money”. He also joked that he had been sent so many Lourdes cigarette lighters that he could probably sell them from a suitcase.

On 11th January 1989, Ray died at his Greenwich home surrounded by Alma and other close family members. Managing Director of BBC Network Radio David Hatch paid tribute by saying “Ray brought comfort, reassurance and above all laughter to millions as day broke.”His funeral took place the following week at All Saints Church in Blackheath.