Princes Dock was the place where many emigrants boarded vessels to take them to the New World and where cruise liners berth today. However more than 200 years ago it was the setting for a much different form of transportation when Vincenzo Lunardi flew overhead in a hydrogen balloon.

The first balloon flight was in Paris in 1783 and although Scot James Tytler flew in Edinburgh in August 1784, the English remained sceptical of flying as a mode of transport. When 200,000 gathered in London the following month it was not an English aeronaut that took off, but instead Vincenzo Lunardi, the Secretary to the Neapolitan ambassador.  Lunardi was accompanied by a cat, dog and caged pigeon and flew 24 miles to Standon Green End in Hertfordshire. 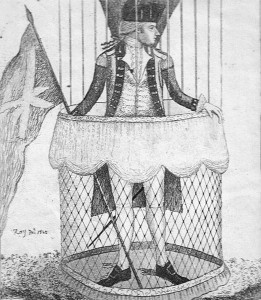 On 29th June 1785 Lunardi made another flight from London, landing near Harrow where a farmer was angered by the damage caused to his crops. He then headed north to Liverpool, where his scheduled take-off on the morning of 20th July had to be postponed due to rain. In the afternoon the sky cleared and Lunardi gave noticed that he intended to try again at 5pm, leading to excited crowds gathering in the north of the town. Due to difficulties lighting the balloon though crowds grew impatient and it wasn’t until 6pm that a gun was discharged to signal that the flight was ready to begin.

Lunardi took off from the North Fort, which was situated between where Canada and Huskisson Docks are now. As he flew over Princes Dock, the crowds clapped and cheered and according to the following day’s Williamson’s Advertiser he ‘gracefully waved his hat and saluted the spectators.’ He then disappeared into a cloud for a few minutes before reappearing and heading in a northerly direction. He remained in the air for 55 minutes, prolonging the flight by disposing of his hat, waistcoat and shirt to save weight. Suffering from the cold due to having discarded some clothes, he eventually landed in a field in Simonswood, Kirkby.

Williamson’s Advertiser reported that his clothes were recovered and that Lunardi was ‘happy in having fulfilled his engagement with the ladies and gentlemen of Liverpool.’  He made another flight on 9th August, this time heading in a southerly direction and landing near Tarporley. He then moved on to Scotland where made ascents from Glasgow and Edinburgh.