There are four equestrian statues in Liverpool, the oldest of which took quite a while for the plans to come to fruition due to the popularity of the monarch in question.

In 1808 a public subscription was announced to raise funds for a statue of King George III to commemorate his 50th anniversary on the throne in 1810. However there was little response due to him being unpopular in Liverpool as the King who ‘lost’ America. 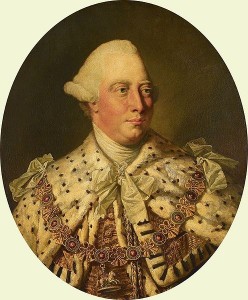 Mentally unstable, George III appointed his son as Prince Regent in 1811 leading to subscriptions almost stopping but when he died in 1820 plans to erect the statue were revived. It had initially been intended to put the statue in Great George Square, but it was decided to place it in London Road instead, so that it was sited on the prominent route that carried stagecoaches into the town.

The statue was sculpted by Richard Westmacott of Mayfair, who also sculpted the Admiral Nelson monument in Exchange Flags that was unveiled in 1813. It arrived on Friday 27th September and with a pedestal having been in what is now Monument Place for several months (the paved area in front of TJ Hughes), the Liverpool Mercury reported that the unveiling would take place ‘almost immediately.’ 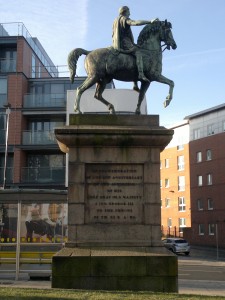 Westmacott had cast George III in bronze, stretching his hand over his people in the style of Marcus Aurelius, Roman Emperor from 161-180 A.D. The statue was a good size and perhaps too big for the pedestal, with the horse’s foot overhanging the edge. People’s memories of him remained mixed, however. One local attending the unveiling didn’t feel that the hand gesture was a sign of blessing, with a Mercury reporter quoting that he had said: ‘The hand is held out to people in a begging attitude, just as if the King is saying “Give me all you have got”.’

Despite the statue being unveiled two years after George III’s death, the inscription on the pedestal still states its initial aim of having been commissioned to commemorate the 50th year of his reign. It reads:

‘IN COMMEMORATION OF THE 50TH ANNIVERSARY OF THE ACCESSION OF HIS MOST GRACIOUS MAJESTY KING GEORGE III TO THE THRONE OF THESE REALMS.’

The statue is now one of four equestrian ones in the city and only 26 in the whole United Kingdom. The others in Liverpool are of Queen Victoria and Prince Albert on St George’s Plateau, and King Edward VII by the Mersey Ferries terminal.