It looks just like any other suburban local railway halt but Broadgreen station, situated a stone’s throw from the end of the M62 motorway, is one of the oldest in the world and has a history of famous visitors and tragic events. 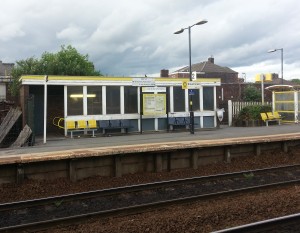 Opened in 1830 as one of the stations on the Liverpool & Manchester line, the world’s first passenger railway, Broadgreen is now the oldest within the city boundary. The other stations in Liverpool that at that time, Edge Hill and Crown Street, closed in 1836 when the line was extended into the town centre and Lime Street along with the current Edge Hill opened.

Broadgreen is now a station handling over half a million commuter passengers a year but in the 19th Century Royalty and the Prime Minister passed through there. On 8th June 1872 Prince Arthur, Queen Victoria’s third eldest son, arrived at Broadgreen where he was met by M.P. Mr S.R. Graves and taken to his home at The Grange, now the site of Wavertree Playground. During his four day visit to Liverpool Prince Arthur opened Sefton Park and also attended a Grand Dress Ball at St George’s Hall along with 1,500 others.

On 24th October 1890 Prime Minister William Gladstone (who was born in Rodney Street in 1809) set off from Broad Green for a tour of Scotland. The night before Gladstone stayed nearby at Court Hey Mansion, which was owned by his nephew Arthur Gladstone, son of his late elder brother Robertson. A large crowd cheered him off and there were also plenty of people lining the platforms at St Helens and Wigan, where he leaned out of the carriages to shake hands with supporters.

As well as some extremely dignified passengers, Broad Green has also seen its fair share of tragedy.  On 17th May 1860 the London to Liverpool express sped through the station. One of the passengers was leaning out of the window and his head caught a lamp that was on the side of a stationary train, almost decapitating him. On arrival at Edge Hill, his lifeless body was found hanging halfway out of the window. Seven years later, on 11th April 1867 a servant girl to Mrs Molyneux who lived at Staplands (now a nursery) was literally cut to pieces when she was run over when crossing the line on her way to the post office.

In 1873 there was a Christmas Eve tragedy when Brazilian Vice-Consul Joas Baptiste Cafferena enjoyed an evening at the Abbey Hotel before being run over and killed by a freight train as he crossed the line to take the 10.40pm train back to Liverpool (note how late the trains ran on Christmas Eve then)! Perhaps the saddest of all took place in September 1867 when Mr and Mrs Green, who had been married only two months, were both killed by a freight train as they crossed the line. Mr Green, an architect, was very badly mutilated and burnt and his body was carried for about a mile up the track.

A subway under the track and the raised platforms means there is far less danger nowadays, but tragedy was miraculously averted in 1972 when a double decker bus careered out of control and came to a stop just yards from the line. Eleven people needed hospital treatment, mainly for shock while a man running down the embankment to help sprained his ankle.

The original platforms and buildings at Broad Green are long gone, the current ones only date from the 1970s but it remains the joint oldest in the world. It is a key station on the local network serving Broadgreen hospital and offering a park and ride facility, with trains going as far afield as Blackpool and Huddersfield from there.