In June 1848 there was a tragedy at Liverpool Zoological Gardens in West Derby Road. Rajah the elephant, one of the main attractions, killed his keeper and was subsequently destroyed.

Rajah had been at the zoo since 1836 and was around 35 years old. He was usually a very docile elephant and would pick his keeper up with his trunk and place him back down on the ground. On the morning of Saturday 17th June 1848 however, he was treated unduly severely and lost his temper, causing the death of the keeper Richard Howard. 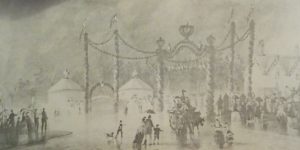 Richard was brushing out the ‘den’ and ordered Rajah to move to the other side, but he did not do so despite being hit with a broom. When Richard struck Rajah harder, the elephant responded by getting him between his tusks and ramming him against the iron bars of the cage. When Richard fell to the ground, Rajah then stood on him, crushing him to death. The whole incident was witnessed by two early morning visitors to the elephant house, Mr and Mrs Liversedge from Stockport.

After Richard’s body was dragged out of the den, Rajah ate the broom that he had been beaten with. The zoo owners, the recently widowed Mrs Atkins and her two sons, decided that despite the loss of such an attraction Rajah had to be destroyed. Communication was sent to the Mayor and thirty soldiers were summoned from the barracks of the 60th Rifles.

It was first decided to try poisoning Rajah. Three surgeons mixed prussic acid, aconite and treacle and put it in a bun, which he ate readily. Within five minutes he was unsteady on his feet and started to have spasms and lay on his side. However, ten minutes later he had recovered and was up and about walking around his den again.

After waiting for three quarters of an hour and it being clear that the poison was not going to work, twelve riflemen were brought to the fore. Their volley was fired at various parts of Rajah’s body but although he growled and staggered, he did not fall. Twelve more riflemen who had been loading up the repeated the procedure. This time Rajah fell down and died instantly.

The shooting of Rajah was witnessed by the Mayor and his brother, doctors and gentlemen from the press. Word had got around the town and many arrived hoping to witness the event, but the Atkins family gave strict orders that the gate remained closed.  One group of men offered five shillings for admission but this was still refused.

Following the shooting, the Messrs Atkins explained that this was the second time Rajah had reacted and killed a keeper. As such they felt they had to remove all apprehension. They also confirmed that Richard Howard’s widow and two children would be provided for. 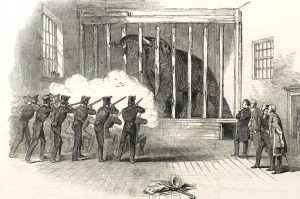 The inquest into Richard’s death took place on the following Tuesday and evidence was heard that he had often mistreated Rajah. The jury’s verdict was that ‘We are of the opinion that deceased came to his death in consequence of having beaten the elephant unmercifully, thereby causing the animal, in his fury, to kill him’. The Coroner expressed regret at the decision of the Atkins family, stating that it was clear that Rajah had killed due to his mistreatment.

When Rajah was dissected in front of an interested crowd, including twenty medical men, there were two huge bangs caused by the escape of gases. Those carrying out the dissection almost fainted from inhaling the noxious substances. Much of Rajah’s two to three ton body was taken away away to form manure, but the zoo owners preserved the head, bones and tusks as it was their intention to put them together again as part of the attraction.

Three years later, there more deaths at the zoological gardens when Queen Victoria visited Liverpool. In honour of this, the Atkins brothers constructed a triumphal arch from which live eagles and parrots hung. Due to extreme weather conditions many of them died. The zoo eventually closed in 1865.