Liverpool City Council’s Municipal Building in Dale Street suffered some bomb damage in World War II, leading to the rear wall having to be rebuilt. Some 80 years earlier, a wall of the building was damaged on a much smaller scale, leading to a youth ending up in court. 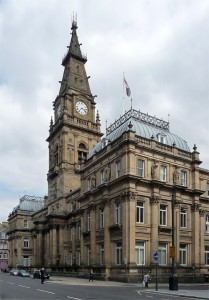 Designed by the Corporation Surveyor John Weightman in 1860 to accommodate the growing number of administrative staff, the building which was first dubbed ‘The New Public Offices’ was almost destroyed before it was completed. In October 1867 a gas explosion occurred as workmen put the finishing touches to the offices of the Inspector of Public Nuisance, leaving two people seriously injured.

Staff moved in to Municipal Building over the next few months with official meetings taking place there from January 1868. With the Liverpool Mercury describing the building as second only to St George’s Hall in the town on architectural merit, there was no tolerance shown to anybody disrespecting it. This meant that on 14th March 1868 when teenager William Adams was scratching a knife back and forth on the wall of the building, there was no chance of the police constable who saw him just giving a clip around the ear and telling him to move on. The youth, who lived at 10 Tweed Street in Kensington, was arrested and was believed to be the first person in Liverpool to be charged with Wantonly Defacing Public Buildings.

At court six days later, Deputy Borough Solicitor Mr Atkinson made it quite clear how annoyed the council chiefs were. He told the Magistrate Mr Raffles that although this was Adams’s first offence, the law still allowed for him to be imprisoned. The Clerk of Works, Mr Cleary, was brought in to explain that the stone had not been chipped but there was a white mark left and it cost a shilling to have it rubbed down. Mr Raffles was scathing as he fined Adams 10 shillings, about half the weekly wage of a labourer.

Saying that the prosecution was a proper one and calling the actions a disgrace to civilised society, he told the Defendant: ‘It is painful to think that in civilised societies like this that handsome public buildings should be exposed to the acts of idle careless people.’ He then made it clear that if anybody chipped the stonework, he would have no hesitation in sentencing them to a period of imprisonment.

World War II saw Municipal Building considerably damaged, with large parts of he rear destroyed.The building remains incredibly durable though, although a recent change has seen the attendant operated life replaced with an electric one. However with the city council now having taken ownership of Cunard Buildings, it is up for sale and likely to become a hotel.