Petrie was born in Newburgh, Fife in 1853 and continued his father and grandfather’s tradition of salmon fisheries along the River Tay. In 1876 he moved south to Manchester, starting a firm of salmon merchants and general fishmongers. He then moved to Liverpool and also pursued salmon interests in Ireland and oyster fisheries in Essex. 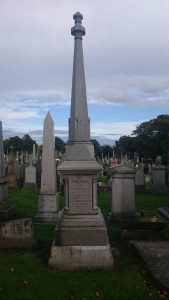 91 Petrie was elected to the city council as a Conservative representative for the Lime Street ward, taking a position on the Lighting Committee. After becoming an alderman in 1899 he was elected Chairman of the Tramways Committee, presiding over the conversion from horse drawn to electric trams.

He was Lord Mayor for 1901-02, overseeing the city’s celebrations for the coronation of King Edward VII. He was knighted in 1903 and later Chairman of the Finance Committee, when he ensured the city was administrated in a sound and steady manner.

Petrie received the Freedom of the City of Liverpool in October 1917, in recognition of his 26 years continuous service on the council. Attention was drawn to him having served on eight committees and he was praised for his excellent temper and goodwill by the Lord Mayor. After being presented with a scroll in a silver casket Petrie said that they had their fights in the council, but when they were over they were done with and he could not hold grudges.

In his later years Petrie was not in good health and he died at his home, Oakfield, Aigburth Hall Road, on 8th November 1920. He had fallen ill with pneumonia. He was buried in Toxteth Park cemetery. He left a widow and two grown up sons, and was also outlived by his father, described as ‘a hardy Scot who lives in Fifeshire’.