Born in Edinburgh in 1842, John Archibald Willox s father was a journalist who wrote a number of shipping books. The family moved to Liverpool and where Willox was educated at Liverpool College. On leaving school he became an apprentice journalist for a press agency and was quickly snapped up by the Liverpool Courier, becoming their editor at the age of just 21. The paper soon went from twice weekly to daily and in 1870 he established the Evening Courier which later became the Evening Express. This was eventually taken over by the Liverpool Echo.

is friend Thomas Cope of Cope Brothers tobacco merchants died and Willox was nominated to execute the will. He became a director of the company and then managing director when Thomas’s brother George died in 1888. That year he also married Thomas widow Sarah, becoming a step father to ten children. Although no longer directly involved with the Courier newspaper, he remained a member of the Consultative Board of the Press Association.

Willox helped with his wife’s philanthropy, donating £15,000 to set up a sanatorium in Delamere Forest in Cheshire. He also had an interest in electricity and became a director of the St Helens tramway company.

In 1892 Edward Whitley, the MP for Everton, died and Willox stood as a Conservative candidate to succeed him. The Tories were so popular in Everton at this time that the Liberals didn’t put forward a candidate and Willox was elected unopposed. He was knighted in 1897 in Queen Victoria’s jubilee honours and a special dinner was held 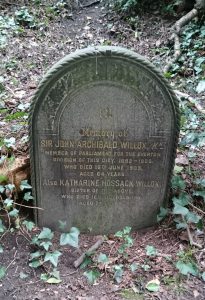 in honour of this at Union Court.

In December 1904 his wife Sara died at a time when his own health was failing. Against medical advice he attended her funeral at Anfield cemetery, aided by two of her sons. He resigned from Parliament the following February and died in June of that year at his home in Abercromby Square.

He left £164,000 in his will, which is £18.3 million in today’s money. Each of his wife’s children were left £10,000 and he also left sizeable donations to the Royal Infirmary, the Southern Hospital, Blue Coat School, Delamere Sanatorium and provided for a number of ex journalist friends. He was buried at St James Cemetery, where in keeping with his modesty there is a simple headstone.