When a Liverpool bound ship collided with another off the coast of North Wales in 1856 there were no casualties, but there was tragedy in the aftermath when one of the captains killed himself after being found liable for the damage.

The collision between the St Lawrence and Gleaner took place on Monday 21st January that year near the Great Orme’s Head, leading to the St Lawrence losing rigging, an anchor and bulwarks.On arrival in Liverpool the following day, the captains of the two ships entered into arbitration and Charles Henry Webb of the St Lawrence was ordered to pay damages of £52, equivalent to £5,000 today, as well as the cost of any repairs to his own ship. 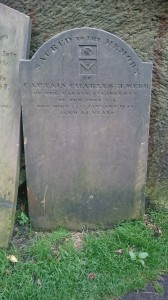 m the St Lawrence decided not to sign up for the return voyage to New York, leading to a serious deterioration in Captain Webb’s spirits. Early on the Thursday morning he returned to the ship after spending the night of the hotel and told his son, also Henry Charles Webb, to take charges of his letters and money.  At half past nine Webb said that he had poisoned himself and asked to be left alone in his room.

In the afternoon a crew member sent for a doctor who believed that Webb was in no immediate danger. The surgeon, Dr Stewart, removed all medicines from the cupboard, sent for a cab to take Webb to hospital and ordered him to drink coffee. However Webb refused to go ashore and insisted on staying in his bed, where he slept fitfully.  At half past six on the Friday morning Webb junior tried to wake his father but found him to be stone cold and sent for help. Dr Hill from Great Howard Street arrived at the St Lawrence, which was berthed in Huskisson Dock, and pronounced life to be extinct.had

An inquest took place the following day before the coroner Mr P F Curry. Webb’s son described how his father’s state of mind had deteriorated since arrival in Liverpool, while the ship’s new chief mate said he had thought Webb to be drunk when he returned on the Thursday morning. He had not taken much more notice of events however as he had been supervising the loading of cargo. Dr Hill reported on the postmortem, which revealed that Webb had died of congestion of the brain and lungs, caused by narcotic poison. Examination of the stomach had found two ounces of laudanum.

After the coroner’s summing up the jury questioned Dr Hill at length in relation to the laudanum and how long it would take to cause death. The doctor replied that coffee was the strongest antidote but as Webb had refused to drink any it, then this was clearly a factor. One member pointed out that as captain of the ship, no crew members could interfere with Webb’s thoughts, hence them calling in external help through Dr Stewart. The jury returned a verdict that Webb had died from taking a narcotic poison, then severely censured Dr Stewart for neglect.