A long road that straddles Childwall and Wavertree recalls a time when the area was farmland not the mass of semi detached houses that it has been since the 1930s. Dunbabin Road, which stretches from the Childwall Triangle end of Taggart Avenue to WooltonRoad and is 800 metres long, remembers Dunbabin farm that was there for at least 150 years. The road itself was present, although unnamed, on Yates and Perry’s map of Liverpool and its environs that was published in 1768. It was part of a track that went all the way to Lodge Lane and also included Ullet Road, and by the 1880s the section that is now Dunbabin Road had been named. The farm buildings were by the corner of Woolton Road. 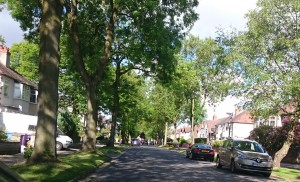 An early reference to the Dunbabin farmers occurred in 1783 when John Dunbabin, a 23 year old farmer from Wavertree married Ellen Birchall at All Saints Church. They would go on to have three children – Mary, John and Peter. Mary and John appear to have never married and were listed in the 1841 census as living at the farm and working as farmers, while Peter and his family were living in Blair Street, Toxteth where he was a labourer. In the 1870s land off Dunbabin Road became the site of the first Liverpool Polo Club, founded by Hugh Gladstone. The club played regular games against Edinburgh towards the end of the decade on land which is now covered by Irene road and surrounding roads. An advert in the Liverpool Mercury of 25th February 1882 offered a reward for the return of a grey pony that had either been stolen from or strayed from the farm. Anyone with information was asked to attend Wavertree police station, which later became Cuffs Bar and has now been re-branded as a Pound Pub. Like many other farms in the region Dunbabin Farm was not alone in being the target of thieves from the inner city area and around that time a calf went missing from the farm with the thief attempting to sell it to a butchers in Lodge Lane. The world was becoming a smaller place in the 1880s due to the onset of railways and now the telephone. However there were objections from those living in the area to a proposal by the Lancashire and Cheshire Telephone Company to lay wires along Dunbabin Road to improve connections between Liverpool and Manchester. At a meeting of the Wavertree Local Board at the Wavertree Town Hall on 2nd June 1886, members expressed dissatisfaction at the proposal saying they were a general nuisance and despite the advantage of the telephone: ‘It was not advisable that they permit their district to be straddled by unsightly poles.’ Surveyors were then instructed to find a different route. By the 1890s Dunbabin farm was run by the Gibbons family, who entered the Birkenhead and Wirral Show in 1891 with their display of collete roses. One of the Gibbons’ daughters was a child governess who regularly advertised in the Liverpool Mercury, listing oil painting amongst her skills. Another regularly placed advertisements for a housemaid position. The outbreak of war in 1914 meant there was a shortage of suitable male farm workers with many joining the armed forces. The Liverpool Echo of 30th December that year carried an advertisement for a ‘young man – good milker, able to drive’ and asked those suitable to apply with references to Dunbabin Farm. The advert ran for a few weeks in January and the post was likely filled but the following September the farm was advertising again for a ‘respectable young man or strong lad’. This time, references were not necessary and the same was the case in August 1916 when the farm required simply ‘a strong lad, able to milk preferred’ and didn’t even mention respectability. Dunbabin Farm contributed to the war effort by allowing some of its land to be used by local members of the National Motor Volunteer Regiment for drill practice. These volunteers were essentially motor enthusiasts who allowed their vehicles to be used for the shipment of troops and others that needed moving around on the Home Front during the war. The first official inspection of the South Liverpool battalion too place there in September 1916, with 225 vehicles being present. In the 1920s the development of the local area gathered pace, with Green Lane North and Terrence Road amongst the first to be laid out. By 1937 the farm buildings were all gone, but there was a reminder of previous times after the Second World War when a Welfare Distribution Office was situated nearby, giving free orange juice to all passing children.

ENGLAND’S SMALLEST HOUSE IN A PUB