Due to it being next to the largest Chinese Arch in Europe the a building dating from the 1840s on the corner of Great George Street and Nelson Street doesn’t quite get as much recognition as it deserves. 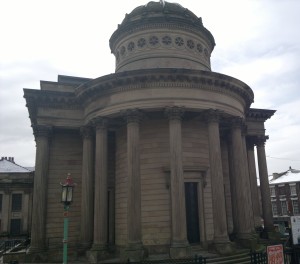 The first church on the site opened in 1812, and had been built for dynamic young preacher Thomas Spencer, whose hour long sermons in Newington were packed out.  He had laid the foundation stone in April 1811 but sadly died a few months afterwards, drowning on 5th August that year whilst bathing a Dingle.

Spencer’s death meant that the first Minister at the newly built nonconformist church would be 24 year old Londoner Reverend Thomas Raffles, who would later publish Memoirs of the Life and Ministry of Reverend Thomas Spencer. Raffles was still minister when the church was destroyed by fire  on the morning of 19th February 1840, caused by faulty stoves which had been left on overnight to heat the building for schoolchildren.

It led to the congregation using a room in the Mechanics Institute on the Sabbath while plans were hastily drawn up for a new chapel. Only the day before the fire the congregation had finalised the insurance of the building for £4,000. This was not enough to cover the rebuilding costs, but £5,500 was quickly raised by subscription and Corporation Architect John Franklin donated his services for free to draw up the new plans. The foundation stone was laid on 7th July 1840, with work taking just fifteen months to complete at a total cost of just under £14,000.

The new structure was 127 feet long and 66 feet across and had pew accommodation for 1750 as well as galleries for children. It had a dome and ten Corinthian columns at the front, while inside a nine fee diameter chandelier with 100 lights hung from the panelled ceiling. The organ was one of the largest in the town, being built by Mr Hill from London, who also made one for York Minster. Underneath the chapel in the basement were two schoolrooms, a restaurant, a lecture room and vestries for the minister and deacons.

Described by the Liverpool Mercury as a ‘magnificent edifice for Divine worship’ it opened on 21st October 1841. The day began at 7am with a private prayer meeting in a lecture room in the basement, led by Dr Raffles and attended by what the Mercury described as ;a very respectable auditory.’ At 1030am a public service was held in the main chapel, outside of which crowds had gathered much earlier. After Dr Raffles gave the opening address quoting from the Book of Chronicles, the main sermon was delivered by Reverend D Fletcher.

Dr Raffles remained at the head of the congregation for nearly fifty years, delivering his sermons in an earnest and impassioned manner. He finally had to retire through ill health in February 1861 and was succeeded by Reverend Enoch Mellor. When Dr Raffles died in 1863, his funeral service was extremely well attended, with 56 carriages including one carrying the Mayor following his hearse from the Great George Street church to the Necropolis on Low Hill.

Throughout its time as a place of worship, the chapel also remained a place of learning and social welfare. Demographic changes in the locality in the second half of the 19th century meant that more affluent residents moved further from the city centre. This led to the church providing social welfare services such as burial clubs and temperance societies.Sunday Schools were popular at the church, as were lectures, with guest speakers including Lady Baden-Powell and Edward Shackleton.

After the last service took place in 1967 the building was acquired by the Peter Moores Foundation, which was set up by the Littlewoods heir to provide philanthropic support to his love of the arts.  The building provided a perfect venue for a centre that could serve local residents but also people passing through the city centre, and was in a multi cultural area meaning that nobody was disadvantaged from being involved. The following year, the country’s first community arts project was launched.

The project was called The Blackie, as by then the building had become known by locals as the ‘Black Church’ due to the years of pollution and grime that had covered it. Even after it was cleaned in the 1980s, there was no question of the name being changed although in keeping with modern times it is now called the Black-E. The Grade II listed exterior has remained the same, but inside there have been plenty of changes over time and it remains a work in progress as funding becomes available.