The tomb of Karl Marx in Highgate Cemetery, London, was sculpted by a Liverpool man.

The son of an antiques dealer, Laurence Bradshaw was born in Liscard on 1st April 1899. He was baptised at St Peters Church in Church Street and by 1901 the family were living at 17 Eleanor Road in Bootle. They later moved to 11 Dyson Street in Walton, where he is listed in the census of 1911. 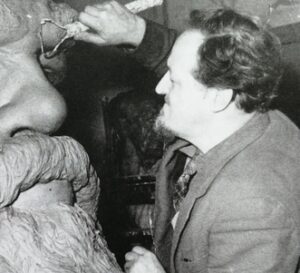 After being conscripted into military service during the 1st World War Laurence was discharged in 1917 suffering from Neurasthenia, the symptoms of which include fatigue and irritability. His army discharge papers list his address as 26 Walton Hall Avenue, where he lived with his mother.

On finishing his studies in painting and sculpting in London, Laurence became an assistant to Welsh painter Frank Brangwyn. In the 1930s he sculpted reliefs at Worthing Town Hall and figures at an Oxford hospital. He also painted recruitment posters for the Spanish International Brigade during the Spanish Civil War (1936-39).

Laurence was a member of the Communist Party of Great Britain, producing artwork for the British-Soviet Friendship Society after the Second World War. His most notable work however was the bust over the tomb of Karl Marx in Highgate Cemetery. On receiving the commission in the early 1950s he wrote “It is  not a monument to a man only but to a great mind and a great philosopher”. Laurence was responsible for the whole design, including text and calligraphy.

Marx, his wife and housekeeper were exhumed from their original graves and reinterred at a new site in Highgate Cemetery in 1954. The new memorial was unveiled by the party’ General Secretary Harry Pollitt in November 1956.

In the 1970s Laurence created a bronze relief of Lenin for the Marx Memorial Library. He died in 1978. Marx’s tomb, one of the most recognisable in the world, was given Grade I listed status in 1999.