The Wapping Dock warehouse is a prominent feature to motorists driving along Wapping and The Strand in Liverpool city centre. Designed by the same engineer who built the Albert Dock, it stands next to Wapping Dock and was the scene of an extraordinary event in 1929 when dockers fought each other for a day’s work.

Jesse Hartley designed the dock which opened in 1852 and the warehouse alongside it was completed in 1856. This was ten years after the Albert Dock warehouses, which were of a similar design and made of brick and cast iron. The Wapping Dock warehouse was originally 232 metres long, but the southern section was bombed in the May Blitz of 1941 and never rebuilt. During the heyday of the south and central docks it was mainly used for storage of fruit and vegetables and remained in operation even after the dock closed in 1972, before being converted to apartments in the last 1980s. 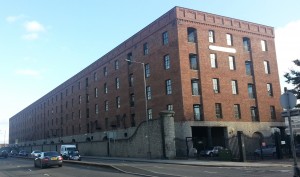 In April 1929 the onset of the Great Depression was still a few months away but already the economy was in downturn, not that it had been great anyway in the decade after the 1st World War. Dock labour was hired on a casual basis, with workers not knowing from one day to the next if they would be able to secure any employment for that day or be paid. It was against the backdrop to this that there were chaotic scenes by the Wapping Dock warehouse on 5th April 1929, when 500 casual labourers were involved in a mass brawl.

On that day the Scottish Prince was due at the dock carrying 35,000 cases of Jaffa oranges. Around 500 men were at the dock waiting when the timekeeper arrived around 730am. He was swamped by the men who fought each other off to get to him, then carried along 100 yards by the crowd, who were shouting ‘we want work’ and ‘remember our families’. Police reinforcements were called from other docks and it took a dozen officers to extricate the timekeeper, who was badly shaken but not injured.

After order was restored 200 men were taken on for the job leaving the other 300 to disperse. The Evening Express described how ‘discoloured eyes, bruises and abrasions, kicked legs and shins were plentiful’ and that one unsuccessful applicant told the paper ‘It was a good scrap while it lasted. I would not be bothered about a couple of black eyes if only I could have got a day’s work.’ One middle aged man had to be taken to hospital for treatment.

It was not until 1947 and the National Dock Labour Scheme that dockers had some form of guaranteed pay if they were not ‘called on’ to work, and permanent contracts were not the norm until the 1960s. Within ten years of that, the docks on the southern end of town were all closed, but they are now thriving again today with different industries. The Scottish Prince, whose arrival sparked the fight, was scrapped after being damaged off the coast of Greece in 1941.