Standing in a sadly derelict state on Princes Road in Toxteth is the Welsh Presbyterian Church, which once laid claim to the title of Liverpool’s tallest building.

Plans for the new church for Toxteth’s growing Welsh community were unveiled in January 1865, when a public meeting was attended by over 1,000 people at their Bedford Street chapel. This had been built in the late 18th century and expanded in the 1840s when congregation numbers had risen to over 200.

David Roberts addressed those present, asking them to give to their utmost ability according to their circumstances, promising that an ‘abundant award’ from the Lord would come to those who did so. The Reverend Henry Rees passionately said that if there was no will to raise the funds, then people should say so now to avoid problems in the future as the land had been secured. He then placed a £20 note on the table, saying it was from a widow’s inheritance and then pledge cards were handed out. By the end of the night £5,000 had been promised, £1,000 of it coming from Mr Roberts. 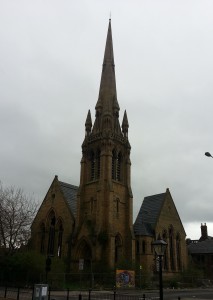 The building is in an early French Gothic style and built with yellow sandstone, the spire rising to 200 feet and apart from the oak, ebony and teak pulpit all the interior wood work was of pitch pine. . The vestries, keeper’s house and lecture rooms all fitted into the overall design and it was described by the Liverpool Mercury as ‘one of the finest of its kind in Liverpool or the neighbourhood.’ It could seat 300 on the ground floor, a further 300 in the galleries and cost a total of £20,000 to build. The architects were W & G Audsley whose offices were in Upper Stanhope Street. Six years after the opening of this church another place of worship they designed opened nearby, with the new Jewish Synagogue being consecrated on 2nd September 1874.

The following Sunday the first Sunday services were held, which included a sermon from Reverend Lewis who had travelled from Swansea. The attendance was so large that the schoolrooms had to be used for overspill and a separate service. All of the services were conducted in Welsh.

Children who attended the Sunday School were given an annual treat, the 1869 excursion seeing 300 children cross the Mersey by boat before taking a special train from Birkenhead to Abergele. A stroll on the seafront was followed by a visit to the new Presbyterian chapel in the town, which was designed by Liverpool’s Richard Owens. They then went to Tan Yr Allt, owned by David Roberts who had made a substantial donation to the building of the church and had erected a tent in his grounds where  a substantial luncheon was provided. They then spent the afternoon playing games, including football, before having tea at 4.30pm and beginning the journey back to Liverpool, arriving around 9pm.

The church became locally as the Welsh Cathedral and was the only one in Liverpool to have that title, spawning several branch churches and mission rooms, such as those in Geraint Street and David Street. It remained in use as a nonconformist chapel until the early 1980s.  The Nigerian based Brotherhood of the Cross and Star bought the building in 1982 and used it for ten years, but it has lain derelict and vandalised since the 1990s. Feasibility studies are now taking place though for it to be restored by the Merseyside Building Preservation Trust using grants from the Heritage Lottery Fund. Having acquired the lease of the building, it is hoped an application can be made in early 2015.