T J Hughes is a Liverpool retail institution, which began in 1912 when Thomas John Hughes opened a small shop in London Road. Within twenty years it had grown to be one of Liverpool’s biggest department stores with over 400 staff.  However, Hughes’s devotion to growing his business was also behind his tragic death in 1933. 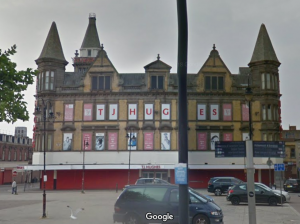 The business was so successful due to Hughes’s business acumen, personality and resourcefulness. He worked almost non stop and never took a holiday. By 1932, Hughes his health was suffering due to overwork and he was forced to relinquish many of his duties. However he found it increasingly difficult to settle down to a life of retirement, especially as he was still only in his early forties.

On 14th April 1933 Hughes boarded the Ulster Queen steamship, bound for Belfast. When the vessel was south of the Isle of Man, he climbed onto the taffrail and shot himself in the head with a revolver, falling into the sea. The vessel was stopped and an extensive search took place, but no body was found. A letter addressed to his wife was later found in his cabin.

Close friends told the press that Hughes had developed a strangeness in manner in recent months, his health strain having made his leisure time insupportable. His decision to travel to Belfast had been spur of the moment and he had been expected to spend the weekend at his home at Easedale, Meols Drive, West Kirby, with his wife and three children.

The body of T J Hughes was never knowingly found. His name is recorded on a family memorial in Liverpool’s Anfield Cemetery.