W. G. Grace, one of the greatest cricketers of all time, was the star attraction of a charity match played at Sefton Park cricket club in 1877. W. G. Grace played for a United South XI in a three day match against the Sefton Park club. 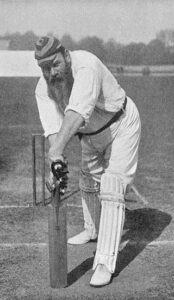 At the time W. G. Grace, who was then combining playing cricket for Gloucestershire with studying medicine in Bristol, was undoubtedly the biggest name in the sport. In 1873 he had become the first to score 1,000 runs and take 100 wickets in the same season, a feat he repeated for the next five years.

All proceeds from the game went to the Royal Southern Hospital in Caryl Street. Admission was sixpence and among the crowd were the Earl of Sefton and Mayor, Andrew Barclay Walker.  To even things up, Sefton Park were allowed to field 18 players compared to the United South eleven. The sheer number fielders meant W. G. Grace, who opened the batting, was restricted to just five runs before he was caught by one of the slips. His side were bowled out in their first innings for a total of just 78.

The first day ended with Sefton Park at 57/5, W. G. Grace having taken three of the wickets. On the second day the Mayor and Earl of Sefton were present again in a crowd estimated at 5,000. The Mayor was so impressed with the specially erected marquee that he made a donation of £10.

Sefton Park’s eighteen were eventually bowled out for 147. W. G. Grace took eleven of their wickets and had five maiden overs amongst the 31 he bowled.

The band from the Seaman’s Orphanage played during the lunch break which took place before the start of the United South’s second innings. W. G. Grace opted to let his younger brother G. F. Grace open the batting and he hit a commendable 53 before being bowled out. W. G. Grace came in as fifth batsman and quickly hit a four. By the end of play on the second day the United South were 105/6 with W. G. Grace not out on nine runs. 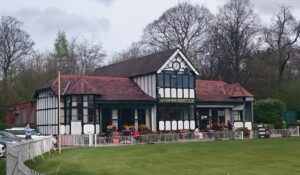 The final day was a Saturday and a brief shower in the morning failed to disrupt play. W. G. Grace continued to impress, hitting another four boundaries before finally being caught leg before wicket on 49. For the tail end of his innings he was partnered by his other brother A. Grace. The United South were eventually bowled out for 178 leaving Sefton Park needing 110 to win.

With just the second ball of their second innings, Sefton Park suffered a blow when one of their opening batsmen was run out. W. G. Grace was not as prolific with his bowling this time, taking just one wicket. It was his brother G. F. Grace who destroyed the home club’s hope of victory. Their batsmen could not cope with his rapid deliveries and he bowled three out whilst conceding just one run. This set up a grandstand finish with plenty of light remaining and Sefton Park at 101 but just one wicket left. However their last batsman was caught leg before wicket, meaning the United South had won a thrilling contest by just eight runs.

The following biography of W.G. Grace is available on Amazon

ENGLAND CRICKETER WHO DIED IN WORKHOUSE