Today it is just one of many takeaways in the Walton area, but Didi’s in Rice Lane is situated in a building with plenty of history, being the last remaining trace of a zoo which was there in Victorian times.

The first zoological gardens in Liverpool were situated off West Derby Road and opened in 1833, closing 32 years later. That zoo had contained caged lions and tigers with antelope running free, but there were problems in obtaining other animals, with the proprietor’s son being killed on the River Nile whilst trying to catch a hippopotamus.

In 1883 the Liverpool Zoological Company was founded and proposed to spend £200,000 developing a twenty acre site off Rice Lane. However a Samuel Huggins from Chester wrote a letter to the Liverpool Mercury, which was published on 16th June that year, warning that this would be too small and that the money proposed wouldn’t go far with elephants costing £1,000 each and lions £500.

The zoological gardens opened in the summer of 1884 to little fanfare and as with the previous gardens some species were allowed to roam free, which could pose problems. In October two cockatoos disappeared and a reward was offered for their safe return.

Financial difficulties soon took a hold and the management of the gardens realised by 1885 that extra incentives had to be given to persuade people to attend, especially taking into account it was outside the city boundary at the time with Walton being a town in its own right. For the August Bank Holiday weekend, new boats were provided on the lake, the hall was made available for dancing and artists performed in the pavilion. Amongst those appearing were vocalist James Kennedy, ventriloquist FRank Vaughan and Fred Coyne, shockingly described by the Mercury as a ‘n*gg*r comedian.’ The day would be rounded off with a fireworks display, which must have been quite stressful for the animals.

By the end of the year the zoological gardens were in dire financial straits and went into liquidation. In March 1886 the liquidators held a two-day auction of the collection, which saw a pair of leopards fetch £62. There were plenty of more interesting non animal exhibits for sale too, including a 6,000 year old Inca mummy and carved Maori temple. The land itself was sold to a Mr G. Bradbury, who paid just £20,000 for it. The following July it was put to use when ninety Greek gypsies, who had refused to leave Central Station after arriving from London, were allowed to set up camp there for two months as they sought a way of making an onward passage to America.

Although animals were kept there on a much smaller scale than previously, the zoo was never a success. It eventually closed with barely a whimper in 1897 and all that remains is the old ticket booths, pictured below. 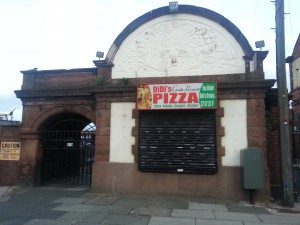